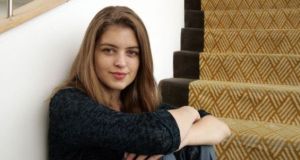 Prior to her transplant in the US this week, Orla Tinsley used social media to urge people to carry a donor card.

Orla Tinsley’s mother, Patricia, has said she and her husband, Brian, and son, Jack, have been overwhelmed by the support for their daughter, who is recovering in New York from a double lung transplant.

“We’re absolutely overwhelmed at the outpouring of love and people’s interest back home,” she said in a telephone interview on Friday. “We knew Orla was high profile, but this . . .”

Mrs Tinsley said Orla, who has cystic fibrosis and has campaigned vigorously for better treatment in Ireland, was in a critical condition but doing as well as could be expected.

The double lung transplant took place at New York’s Presbyterian Hospital, which is linked to Columbia University, where Orla had studied, between about 10pm on Wednesday and 7.30am on Thursday.

The family and Orla’s friend Quentin Fottrell, the journalist, stayed in the hospital throughout; Mrs Tinsley described Orla going into theatre. “As the doors closed, Orla had thumbs up and waved to us. She’s a great trooper.”

Since the transplant, Orla has been kept mostly in deep sedation, is on a ventilator and is assisted also by an ECMO, an extracorporeal membrane oxygenation system, which helps removes toxins from the air she is breathing.

“I was just in touch with the hospital, and they say she’s critical but stable. A typical hospital statement, I suppose,” said Mrs Tinsley, a former nurse. “She’s pretty sick and completely sedated at the moment, and they’re keeping her like that for maybe three days . . .

“They woke her up this morning. They withdrew the sedation and told her we were here and then put her back to sleep. It’s very important that she rest.”

The Tinsleys are staying in Orla’s apartment off Broadway, which is about 15 minutes by subway from the hospital.

Asked what they would do for Christmas Day, Mrs Tinsley laughed and said: “I haven’t a dicky bird . . . We’ll just go with the flow.”

Although the city is decked out festively, Mrs Tinsley said she had hardly noticed. Standing in a queue at a shop, she heard her first carol and sang along as people standing with her began singing.

Everyone is hoping for the best.

“We’ve been very positive all the time,” she said. “Orla was so positive. We’ve always stayed positive, but those six calls [for operations that did not happen] chipped away at us, but then the seventh came [and] it all happened so quickly.”

All they could do now was wait and hope for the best.