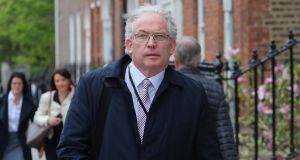 HSE chief Tony O’Brien has said he was told in 2016 that the results of audit findings in relation to who developed cervical cancer were to be communicated to the patients concerned.

He told the Dáil Public Accounts Committee that he had received a briefing note from the HSE’s national director for health and well-being Stephanie O’Keefe.

Mr O’Brien said he was informed that the audits had not thrown up any issues of concern in relation to quality assurance in the cervical cancer screening programme.

He said he was told a carefully-planned programme of communication was to commence.

Earlier, Fianna Fáil TD Marc MacSharry claimed Mr O’Brien would not last 20 minutes if he was working in the private sector.

During heated exchanges at the committee on Thursday he said every woman in the country was terrified in the light of the current cervical screening controversy.

Mr O’Brien said Mr MacSharry was causing hysteria and was failing to accept the reality of population -based screening programmes.

He said such programmes were not infallible.

He said the Cervical Check programme had detected 50,000 high grade abnormalities and had led to the avoidance of hundreds of incidents of cervical cancer and deaths.

Mr MacSharry said Mr O’Brien was in charge of a health system in which there had been gross systemic failures and that people were dying.