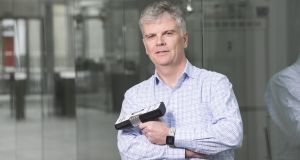 Prof Peter O’Brien of the Tyndall National Institute in Cork,with the new handheld device that uses biophotonics technology to detect early heart disease. It can be used by GPs in their surgeries.

Scientists at the Tyndall National Institute in Cork have developed a handheld device that enables early detection of changes to arteries in the body that can lead to heart failure.

The light-sensing device, they predict, has the potential to save lives, save time and ease workloads on acute hospitals, while enabling GPs to scan patients and get accurate results immediately.

The researchers, led by Prof Peter O’Brien, developed the light-sensing technology for the early stage detection of narrowing of arteries or stiffness – known as cardio stenosis.

The condition is one of the most frequent and most serious valve disease problem if the aorta –the body’s largest artery – is affected.

Cardiovascular disease is the biggest cause of death in Ireland, and the new device could save lives through early detection of heart failure, Prof O’Brien said.

The device is a compact instrument that enables patient monitoring to be performed in a doctor’s surgery, providing a faster diagnosis and avoiding the requirement of a hospital stay to undergo tests, he added.

It also means patients in most cases will not have to undergo a costly magnetic resonance imaging (MRI) scan, or an electrocardiography procedure (known as an ECG test); the process of recording the electrical activity of the heart over a period of time using electrodes placed over the skin.

Patients have to await the outcome of such tests, while the technology developed by the institute is quick and painless, he said. Using what are tiny photonic microchips and laser technology, the device rapidly scans the characteristics of a patient’s blood flow.

The biophotonic device can accurately measure arterial stiffness and other indicators that will alert doctors to hardening of the arteries and provide an early warning for cardiovascular disease, Prof O’Brien explained.

Fully working prototypes have been undergoing clinical trials in the Paris Centre for Cardiovascular Research.

Photonics involves the generation, control and detection of light. It includes high-speed fibre optic communications; sensors, the control of self-driving cars and emerging mass market products in the “internet of things” – the interconnection via the internet of computing devices embedded in everyday objects, enabling them to send and receive data.

Speaking from a photonics conference in San Francisco, where the new device is on show, he said: “We are developing a number of highly advanced biophotonic devices for clinical diagnostics and minimally invasive surgical and imaging applications.”

“The need for photonics is driven by the fact that the speed and usage of our day-to-day technology is almost at capacity, whereas photonics will address mass market requirements in communications, healthcare and security,” Prof O’Brien said.

Tyndall is heading the world’s first photonics pilot production line, known as PIXAPP, part of an international initiative to develop and transfer prototypes to commercial products. The value of the photonics market is expected to be worth more than €615 billion globally by 2020.

To provide Europe with state-of-the-art infrastructure developing the technology, and support the industrial development and the manufacture of photonic integrated circuits, the EU has invested €15.5 million in PIXAPP.

The institute is attached to UCC and is also home to the Irish Photonics Integration Centre, which with the PIXAPP team employs 160 photonics researchers.