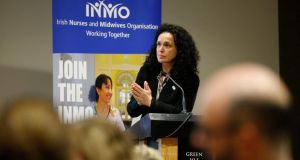 The Irish Nurses and Midwives Organisation (INMO) is recommending acceptance of the Labour Court recommendations on resolving the union’s pay dispute.

Following a meeting of the executive council of the union on Wednesday morning, the the union decided to recommend acceptance subject to the successful conclusion of contract negotiations due to take place over the next three weeks.

The ballot of almost 40,000 members will take place between March 11th and 25th, after completion of the contract talks, and the ballot result will be announced on March 28th.

Following the executive council meeting, union officials held a briefing and question and answer sessions with up to 500 nurses who were members of hospital strike committees during the dispute.

If the deal is approved some 26,000 nurses and midwives will receive €1,200 on average in additional payments.

The agreement would see a new grade which many nurses can transfer to for higher salaries, and while some nurses would see a salary rise of almost €2,500, or more than 7 per cent, this includes pay increases already due.

Nurses: What do you think of the pay deal?

Overall the proposed deal would be worth an average 2.5 per cent for nurses and midwives, with bigger increases among younger and newly-qualified nurses.

However, the union contends the complexity of the deal means an averaged figure for pay increases cannot be determined.

Referring to the briefing with strike committees, a union source said: “People went in very angry based on what they had read about the deal on social media, but the mood by the end was a lot more positive.”

The union plans to distribute a full summary of the agreement to members shortly and regional meetings will be held across the State over the coming weeks.

The Labour Court agreement provides for a new nursing contract focused on the delivery of improved patients and service outcomes to be finalised within three weeks.

The INMO staged three one-day strikes this months but further planned industrial action over three days of this week was suspended on Monday following the court’s intervention.

The annual cost of the deal is €35 million.

The agreement also sets out a series of productivity requirements and other workplace reforms.

The Government is also hoping that the productivity measures and a reduction in the €114 million a year bill for staff provided by employment agencies will generate further savings.