One of the busiest maternity hospitals in Europe 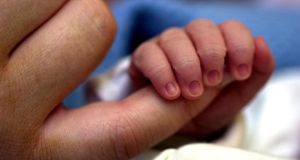 Babies are delivered at the rate of one for every hour of the day.

The news that the National Maternity Hospital is to move to a new home at St Vincent’s hospital marks the beginning of the end of an era in Irish maternity care.

It also marks the start of a new era that will ultimately see the other two Dublin maternity hospitals – the Rotunda and the Coombe Women’s Hospital – also move to new premises.

Tens of thousands of women from the greater Dublin region who gave birth in Holles Street will have fond memories of its dim wards and labyrinthine corridors.

New babies pop out here at the rate of one for every hour of the day, making it one of the busiest maternity hospitals in Europe.

But things couldn’t go on as they were. Holles Street was mentioned in Ulysses and, in parts, it looks it. The site is small so services are piled high, with heavy reliance on elevators for access. Lack of space means little separation for women undergoing miscarriage from mothers experiencing the contrasting joy of delivering a healthy baby. Holles Street doesn’t have an intensive care unit for emergency cases (neither does the Rotunda or the Coombe).

Holles Street has been campaigning for years for a move to fresh pastures and a 2008 KPMG report recommended that all three hospitals be rebuilt on greenfield sites.

The campaign has seen many false dawns before, most recently last year when a deal with Nama to purchase the Elm Park development adjacent to St Vincent’s in Dublin 4 foundered at the last moment.

The move fits well with the recent announcement of hospital groups, which brackets Holles Street with St Vincent’s and 11 other hospitals in the Dublin East group. But it won’t have any immediate implications for the curious governance arrangements at the hospital. Under a statute dating from the 1930s, the chairman of the hospital’s board of governors is the Archbishop of Dublin, even though the incumbent and his predecessor opt not to take up the role. Unpicking that particular arrangement would require legislation.

The “national” in the official name for Holles Street is merely a quirk of the title and does not denote any wider State-wide role for the hospital. However, it is, by a whisker ahead of the Rotunda, the largest maternity unit in the country, with over 9,500 births a year. It has in recent years been most in the limelight, thanks to the high profile enjoyed by Rhona Mahony, the first woman master of a Dublin maternity hospital.

Mahony and a previous master, Peter Boylan, have been prominent in advocating changes to Ireland’s abortion laws in order to provide clarity for obstetricians and their women patients. Their role won’t have done Holles Street’s efforts to be heard any harm in the corridors of powers but the campaign for a move has been going on since the late 1990s, so this is hardly an overnight success.

Just as with the proposed national children’s hospital, the Government is being coy about the overall cost of the project, and once again “commercial sensitivities” are being cited. The €150 million being pledged from the Department of Health’s capital budget seems low for a project of this size.

The ultimate fate of the existing buildings will also require careful consideration. The facade of Holles Street bookends one of Dublin’s finest vistas, down Fitzwilliam Street and the site is bang in the middle of Georgian Dublin.

The other Dublin maternity hospitals must be wondering when they will get similar funding. The Coombe recently upgraded its facilities and is least in need of new premises.

The Rotunda, which is arguably operating in even more cramped conditions than Holles Street, faces an uncertain future. It suffered a major blow last year when the children’s hospital project was moved from the nearby Mater hospital to St James’s. Then, last month, the Rotunda and the Mater were placed in separate hospital groups, despite their close links. An eventual move to a greenfield site at Beaumont or near the M50 seems possible, but would be highly unpopular with staff.