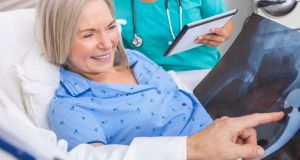 The operation is designed to replace a hip joint which has been damaged, usually by arthritis.

More than 2,100 people are waiting for hip replacement operations in the State’s hospitals, figures from the Health Service Executive show.

The operation is designed to replace a hip joint which has been damaged, usually by arthritis.

Seventy individuals have been waiting more than 18 months for the orthopaedic surgery – more than half of those in the west and north west regions.

In total, 2,165 people are on hospital waiting lists for the operation. Some 709 of those have been waiting up to three months, 514 between three and six months and 373 patients are waiting between six and nine months.

The Ireland East Hospital Group, which includes Cappagh National Orthopaedic Hospital, the Mater, Our Lady’s Hospital Navan and St Vincent’s, has the highest number of people waiting, at 711. However, more than 460 of those have been waiting less than six months for a hip replacement.

In hospitals in Galway, Letterkenny, Mayo and Sligo, there are 568 people waiting for the operation, 315 of those for less than six months and 109 for more than 12 months.

In the south, hospitals in Cork, Kerry and Waterford have 217 people on hip replacement waiting lists, but 103 of those have been waiting less than three months.

The figures were provided by the HSE to Fine Gael TD Bernard Durkan after he tabled a parliamentary question to Minister for Health Simon Harris last month.

Mr Harris acknowledged that waiting times were often “unacceptably long” and that he was conscious of the burden that this placed on patients and their families.

Reducing waiting times for the longest waiting patients was one of the Government’s key priorities, he added.

Consequently, last year’s budget allocated €20 million to the National Treatment Purchase Fund. This would rise to €55 million in 2018.

Mr Harris said that in order to reduce the numbers of long-waiting patients, he had asked the HSE to develop waiting list action plans for this year in the areas of in-patient/day case, scoliosis and outpatient services.

The in-patient/day case action plan was being delivered through “a combination of normal hospital activity, as well as insourcing and outsourcing initiatives utilising NTPF funding”. Since early February, over 23,800 patients had come off the in-patient/ day case waiting list, he said.

To date, 5,901 patients have been authorised for treatment in private hospitals under NTPF initiatives.