Almost a third of Irish children are now overweight – study 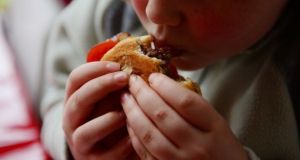 Much of the increase in recent years has taken place in developing countries. File photograph: Bryan O’Brien/The Irish Times

Almost a third of Irish children are now overweight and the country ranks 58th out of 200 countries for its proportion of overweight youths, new data shows.

Latest statistics compiled by the NCD Risk Factor Collaboration, and reported on in The Lancet medical journal, demonstrate a 10-fold increase in the rate of obesity among Irish boys between 1975 and 2016, and a 9-fold increase among Irish girls.

Irish boys rank 98th in the obesity charts and girls are 78th out of the 200, but there is more consistency in the country’s proportion of overweight children with both boys and girls coming in 58th place globally.

Current childhood obesity rates were highest in some Polynesian islands, where they exceeded 30 per cent.

A fifth of children and teenagers in the US and a tenth of those in the UK were obese.

The publication of the research coincided with the introduction of a tax on sugar-sweetened drinks announced in the Budget on Tuesday, the first such levy to be imposed in Ireland.

Drinks with a sugar content of 8g per 100ml will be taxed at a rate of 30 cent per litre under the new measures, which are aimed at combating obesity rates in the State.

Representatives from the food and beverages industry have criticised the move, and say it will do little to address the obesity epidemic.

Overall, rates of obesity among children and teenagers have soared 10-fold around the world in the past four decades according to the global study.

Between 1975 and 2016 the estimated number of obese boys in the world increased from six million to 74 million. Girls showed a similar trend, with their obesity figure rising from five million to 50 million over the same period.

Much of the increase in recent years has taken place in developing countries while obesity rates among young people in Europe and the US were said to have plateaued.

The results appeared in The Lancet medical journal to coincide with World Obesity Day on Wednesday.

Study author Dr James Bentham, from the University of Kent, said: “This is not an excuse for complacency as more than one in five young people in the USA and one in 10 in the UK are obese.

“Rates of child and adolescent obesity are accelerating in east, south and south-east Asia, and continue to increase in other low and middle-income regions.”

In total, 124 million children and adolescents around the world had a body mass index (BMI) of 30 or higher, categorising them as obese.

A further 213 million fell into the “overweight” range, with BMIs of between 25 and 29.9. BMI is a standard measurement that relates weight and height.

The researchers pooled together 2,416 studies looking at BMI and obesity to analyse data on 128.9 million participants from around the world, including 31.5 million children and teenagers aged five to 19.

Irish clinicians recently called for bariatric surgery to be made more commonly available as a means of treatment for obesity.

The Irish Society for Clinical Nutrition (IrSPEN) along with the Association for the Study of Obesity on the Island of Ireland (ASOI) want the Government to implement a dedicated national obesity treatment programme in order to curb the trend which will see a third of Irish adults suffer from the condition by 2025.

Other organisations including Safefood, the Royal College of Physicians of Ireland Policy Group on Obesity, and Diabetes Ireland have backed calls for an obesity treatment programme which would encompass elements including surgeries, weight-loss medication, dietary support and therapies.

IrSPEN and the ASOI have also called for a greater focus on early intervention and prevention to reduce the need for treatment.

“We urgently need a commitment from the Department of Health, the Department of Finance and the HSE to develop, implement and evaluate a national clinical programme for obesity that will provide suitable treatment for obesity,” said ASOI board member Dr Grace O’Malley.

Helen Heneghan, a bariatric surgeon at St Vincent’s Hospital in Dublin, added: “We are facing an obesity crisis in Ireland and we need to invest in a national obesity treatment programme with dedicated resources as a matter of priority.”

The Lancet study found that despite the obesity trend, more children around the world are severely underweight than overweight, the research showed.

The research also showed that around the world 75 million girls and 117 million boys were moderately or severely underweight in 2016. Almost two-thirds of underweight children lived in southern Asia.