More men are assuming their position on the yoga mat 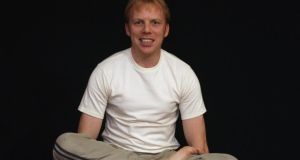 A roomful of women, stretching – that’s the traditional view of yoga, especially among men. But the lingering perception that yoga is a whimsical pursuit, involving nothing more demanding than flexing your chakras and waving your arms in the air, is on its way out.

Perhaps inspired by such soccer stars as Ryan Giggs and Roy Keane, both of whom are known to be yoga enthusiasts, more and more men are making the decision to step on to the mat. And the results can be extraordinary.

As yoga teacher Claudia Gutierrez, who offers specialist classes for men at her Dún Laoghaire studio, points out, “Yoga gives the term ‘full body workout’ a whole new meaning. During sports, we tend to utilise only about 10-15 per cent of the body, whereas yoga provides a workout that covers every muscle, joint and organ.”

Physical pain
Toby Millie, who teaches at the Kilkenny School of Yoga, decided to give it a go after his job began to take an excessive toll on his physical and mental health.

“Pain was my motivator,” he says. “I was a nationwide sales rep, it was a stressful job that also involved huge amounts of driving. I started to have trouble with my hips, and I found some stretches that really helped.”

Millie, who also offers men-only classes at the Kilkenny studio, is passionate about the benefits of yoga for the male body and mind.

“When yoga first arrived in Ireland, it was seen as a very hippy thing, all chakras and energy centres. But actually it’s all about common sense and taking a preventative approach to healthcare.

“I ask my male students to imagine that they will have only one car, say a brand new Mercedes, for the rest of their lives. If that was the case, they’d be out waxing it and servicing it all the time. In the same way, your body is your lifelong vehicle. You need to look after it. [It’s] as simple as that.”

But why offer classes that are specifically for men? “Well, a lot of blokes get into physical activities through competitive sport, and some may feel concerned that yoga might be competitive too, even though it’s not. But it’s true that women are often a lot stretchier than men. So this is just a way to make yoga that little bit more accessible for them.”


Another advantage of all-male classes is that a lot of men share similar problems, according to Millie. “We see tight hips, lower backs, hamstrings and shoulders. Much of men’s work – whether office-based, driving or manual labour – is repetitive. Most people specialise in what they do, so they end up making the same movements, such as frequent forward-bending, for their whole life. So we do a lot of back-bends, opening up hips, things like that.

“We show them how to stretch out properly, as well as build core strength. One guy was in pain for two years, and within a few lessons, the pain was away. He just needed to learn how to stretch.”

Not everyone chooses the men-only route. Conor, a writer in his 40s, decided to take the plunge last year. He attends a small studio, where he is often the only man in his class.

“Like most men of my age, I saw exercise as all about brute force – cycle 30 miles, pound the treadmill until you drop, be manly and sweat. But I started to notice that I was feeling more and more like a hamster when I was training and not enjoying it as much as I should.

“After a bout of illness, the doctor said I should try something different, like yoga, to get me back into shape.”

To his own surprise, Conor was an instant convert. “I love the quiet demands of holding a position and and I love the way I can actually feel my body moving and stretching. I definitely think it has helped with my other exercise in making me more subtle but also more focused.”


What about the more inward-looking, meditative side of the practice, the breathing and chanting? “There are one or two meditations which I have found to be especially helpful,” says Conor.

“The mental aspect is very beneficial, and I do feel more confident in myself. I haven’t noticed any butterfly wings flapping as I meditate but I have noticed just how much more there is to life when you stretch and reflect on it.”

But any female partners planning to urge or otherwise coerce their men into taking up yoga should think again.

Mark Cregan, who practises and teaches with Flow Yoga Studio in Belfast, says that his wife had long been suggesting he give it a try. Yet it was only when he made the decision to attend a class himself that his passion for the practice took off.

“Let’s face it, if a man is told by a woman that he should do something, he’s likely to do the opposite,” he laughs. “It has to happen organically.”