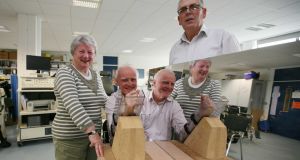 A team of researchers at IT Sligo is using mirror therapy to help stroke patients improve the strength and mobility of affected limbs, and the researchers claim the results of clinical trials are “very significant”.

Following clinical trials on more than 60 patients, Enterprise Ireland this month granted the team a €15,000 grant to investigate the feasibility of developing the product commercially.

Dr Monaghan said 40 per cent of patients reported “a significant life-changing improvement” after undergoing the trials. The researchers use a treadmill with mirror attached, and alternatively a brace for strengthening arms and legs which incorporates the mirror therapy.

Both devices were created by Dave Roberts, creative design lecturer in the college. “I think it’s good news for people who have had a stroke and who have limited function as a result. This therapy can improve dexterity and strength for a significant proportion.”

Two of the researchers, PhD students Monika Ehrensberger and Daniel Simpson, presented a paper on their findings at the European Stroke Conference in Berlin this summer, while Irish and international experts have expressed an interest in collaborating with the team.

“We have seen strength gains as well as improvement in function, which has an impact on quality of life,” said Mr Simpson, who has spent two years travelling to patients’ homes with Ms Ehrensberger to provide the therapy three times a week over a four-week stretch.

PhD student Patrick Broderick who specialises in the treadmill-with-mirror therapy says it has the potential to transform lives.

Dr Monaghan said: “This has never been done before. The mirror on the treadmill helps people to walk more symmetrically, in other words they lose that stroke gait.”

The team, which operates within the clinical health and nutrition centre at IT Sligo, has been awarded over €230,000 in grants over the last two years, including funding from the college, the Irish Research Council, the Northwest Stroke Support Group and Enterprise Ireland.

Many of those participating in the trials were referred by local medical experts from Sligo University Hospital (SUH) and St John’s community hospital, Sligo.

Dr Paula Hickey, consultant geriatrician at SUH, said over 30,000 people in Ireland live with disability due to stroke.

“Through our collaboration with this research group we are seeing substantial benefits in a group of patients that traditionally might have been viewed as having ‘finished’ their treatment and even felt to be beyond help.”

Ms Ehrensberger said recovery appeared to be more marked in “moderate” patients, while Dr Monaghan acknowledged that patients might not benefit several years after having had a stroke. “After several years the muscle and the tissue tighten up if not moved.”

The €15,000 grant will be used for market research into the potential of the brace.

“If the results are good, which they should be, we will apply for a full commercial grant to make the product which people could bring into their own homes. It all ties into the idea of getting people out of hospitals,” said Dr Monaghan.

Edward Blake (75) , former chairman of North West Stroke Support Group, is hugely supportive of the project, although it came too late for him. “I had a stroke in 2003, so I did not benefit as much as the others, but this is real and we need to support the research.

“My focus is on people who have had strokes – the thought of someone living in a bungalow or cottage in rural Ireland who sees no one but the postman. There has to be more to life. I’d like to see all patients availing of this.”