Menthol cigarettes to be banned later this year 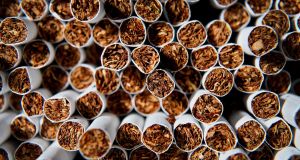 Menthol cigarettes, along with irregularly shaped cigarette packs, are to be banned later this year.

The change follows the completion of a four-year phasing-in period under a 2016 EU directive on tobacco products.

It says no person may supply cigarettes with a technical feature allowing consumers to modify the smell, taste or smoke intensity of the product.

The ban, which takes effect on May 20th, covers menthol cigarettes, which use flavours to relax the airways and make smoking easier on a person’s throat.

Minister for Health Simon Harris said it was obvious that flavoured cigarettes were being targeted at young people and aimed at encouraging a new generation to take up smoking.

“But just because they smell a bit nicer does not mean they are less harmful. They cause many diseases, including cancer and heart disease. Some research shows that menthol cigarettes may be more addictive than non-menthol cigarettes,” he said.

“The changes will also mean slim packs and other irregular shaped packs will no longer be allowed. The industry has continued to adapt and lure our children into this deadly addiction and we must continue to act also.”

He said that despite progress in the area, tobacco remains one of the greatest public health challenges and that smoking leads to some 6,000 deaths a year in Ireland.