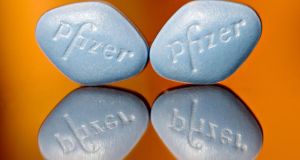 More than 115,000 prescriptions for Viagra were filled in 2011, according to new figures from the Department of Health. The cost of prescribing the drug has also reached record levels, at almost €3.5 million, not including the dispensing fees paid to pharmacists.

Viagra has cost the taxpayer almost €28 million under the medical card scheme since it was introduced in 1999, the information provided by Minister of State Alex White to Fine Gael TD Billy Timmins shows.

Public patients are restricted to purchasing four Viagra-type tablets per month by the HSE.

Mr Timmins said he would be contacting the Minister for Health, James Reilly, to ask why the amount of Viagra being dispensed to medical cardholders is on the increase. “I’m at a loss to understand this trend,” he says.

The HSE says Viagra, manufactured by Pfizer in Cork, is also prescribed for pulmonary arterial hypertension and it is not possible to say how much is for treating erectile dysfunction.

Previous figures showed the highest use of the drug is in Limerick city and county.