Analysis: Most of 34 recommendations after Savita’s death fully or largely implemented 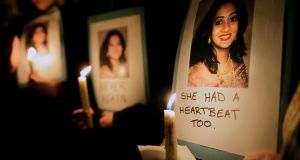 Protesters maintain a vigil outside the Dáil after the death of Savita Halappanavar in October 2012. Her story went around the world and focused international attention, most of it unfavourable, on Ireland. File photograph: Julien Behal/PA Wire

On the face of it, much has changed in Irish maternity services in the 3½ years since the tragic death of Savita Halappanavar.

Most of the recommendations made in the reports commissioned on foot of her death have been implemented.

New resources have been provided and training has been improved. The laws on abortion have been reformed and it seems further change is likely.

Savita’s story went around the world and focused international attention, most of it unfavourable, on Ireland. The Government, squirming uncomfortably in the glare of adverse publicity, promised much.

Where the cost was not prohibitive, improvements were made - better training, use of checklists, improved communications between staff, an overarching strategy for maternity services.

More radical changes such as a drastic improvement in staffing ratios and the construction of new facilities, are, by and large, still awaited. Most Irish women still give birth in unsuitable, often cramped, maternity units that should have been replaced long ago.

Savita’s case was the catalyst for a closer examination of Irish maternity services, and the resulting scrutiny has not been kind.

Questions have been asked about other maternal deaths, in Sligo and elsewhere.

The scandal surrounding half-a-dozen needless baby deaths in Portlaoise emerged, and the resulting publicity brought to light scores of other cases where families were unhappy at the information provided about the death of their child.

The attention has been harsh on staff already coping with low resources and long working hours.

The vast majority of pregnancies go well, but in a minority of cases the unexpected can happen, sometimes with tragic outcomes.

Some of these will come down to human error, but many will arise through no fault on the part of staff. Despite advances made in medical science, this remains the case.

In all, 34 recommendations were made in three separate reports into Savita’s death by the HSE, the Health Information and Quality Authority (Hiqa) and at the inquest. The vast majority have been fully or mostly implemented.

Most importantly, this includes a new early warning system to detect pregnancy complications; guidelines on infection in pregnancy, sepsis and second trimester miscarriage; better handovers between staff; and bereavement and counselling services where miscarriage occurs.

Some of the findings go beyond the area of maternity service - for example, greater awareness of the role played by sepsis in hastening the deterioration of a sick patient.

Despite reports on Savita and on the Portlaoise baby deaths, it wasn’t until late last year that the long-promised national maternity strategy was published. A separate report on staffing levels in the sector has yet to materialise, but we already know the employment of obstetricians and midwives in Ireland is well below international averages.

Do the changes made mean another case like Savita’s will not happen again?

No - individual tragedies will always occur in medicine. The point is to ensure they occur as rarely as possible and, to the greatest extent possible, that they are not caused by human error.