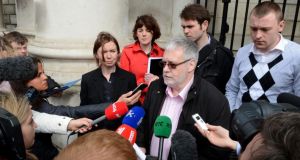 The partner of Marie Fleming, the terminally ill 59-year-old who today lost her landmark challenge to the blanket ban on assisted suicide, has indicated he would help her to die if she made that decision.

Tom Curran said he and Ms Fleming, who is in the final stages of multiple sclerosis, were “very disappointed” after the Supreme Court rejected her appeal against the High Court’s refusal to grant orders that would allow her to be lawfully helped to end her life at a time of her choice.

“It’s very difficult to understand how a person with a disability can be deprived of something that’s legally available to everybody else, every able-bodied person,” Mr Curran said at the Four Courts after the judgment this morning. “And for that not to be discriminatory under the constitution. That’s something we fail to understand.

“The constitution is there to protect people like Marie and to give them solace that they will be looked after.”

The seven-judge Supreme Court ruled there was no constitutional right which the State, including the courts, must protect and vindicate, either to die by suicide or to arrange for the termination of one’s own life at a time of one’s choosing.

The principle of equal treatment also did not confer on Ms Fleming, as a disabled person, the right to be assisted in taking her own life, the court ruled.

Mr Curran said: “The court has ruled on Marie’s future, as far as they’re concerned, and we will now go back to Wicklow and live our lives until such time as Marie makes up her mind that she has had enough. And in that case the court will have an opportunity to decide on my future.”

Asked whether that meant he would help his partner to die, Mr Curran replied: “That will only come up if Marie makes the decision herself.”

The Chief Justice, Mrs Justice Susan Denham, stressed nothing in the court’s judgment “should be taken as necessarily implying it would not be open to the State, in the event the Oireachtas were satisfied that measures with appropriate safeguards could be introduced, to deal with a case such as that of Ms Fleming’s”.

Ms Fleming was not well enough to attend today’s brief court hearing. Mr Curran , who was in court with other family members, said his partner was “very disappointed” she could not attend. She was suffering from “what could have been a fatal chest infection,” he added.

“As you probably know, it has been a very difficult situation, both emotionally and physically, for Marie to bring this case here - to ask for help to die.”

Ms Fleming had claimed the absolute ban on assisted suicide in Section 2.2 of the Criminal Law Suicide Act 1993, in her particular circumstances as a severely disabled person unable to take her own life unaided, disproportionately infringed her personal autonomy rights under the Constitution and European Convention on Human Rights.

She claimed the ban was discriminatory in that an able-bodied person may take their own life lawfully, but she could not be lawfully helped to do the same.

Ms Fleming had not appealed against the High Court’s refusal to direct the DPP to issue guidelines as to what factors would be taken into account in considering whether to prosecute cases of assisted suicide.

Last January, the High Court ruled the absolute ban is fully justified under the Constitution to protect the most vulnerable in society, and cannot be diluted even in the “harrowing” case of Ms Fleming.

However, the court said it was “sure” the DPP would act in a “humane and sensitive” way in considering whether or not to prosecute any assisted suicide of Ms Fleming.