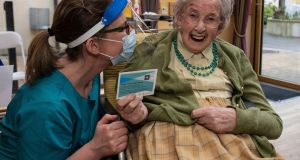 Ireland’s Covid-19 vaccine roll-out is neither as bad, nor as good, as has been claimed over the past week.

It is far from the “miserable failure” claimed by Fianna Fáil backbencher Marc MacSharry, but it is not as superlative as might be thought from the selective use of statistics showing us at the top of a European league table on a particular day.

From a sluggish start it is now chugging along at a steady rate, constrained principally by the supply of vaccines from the drug companies that manufacture them.

Uncertainties surrounding that supply are the main source of concern over the next month, but overall there is good reason to believe the programme can be successfully accelerated in the spring and summer.

By next weekend, all residents and staff in nursing homes will have been vaccinated, and the programme will then move on to immunising other older people who are most at risk of serious illness.

Together with the widespread vaccination of healthcare workers, this will ensure the potential for the virus to make people extremely sick and to put pressure on the health system will be greatly reduced. The current surge, although the biggest, should also be the last.

Vaccination programmes are often a game of two halves. In the first phase, as during the current pandemic, there is a huge pent-up demand for a vaccine, and things can never move quickly enough. Any perception that vaccines are not being distributed fairly, according to clear criteria, can be extremely damaging.

But in the second half, when it comes to vaccinating the more hesitant, or less at risk, sections of the population, accusations of undue haste are often made, and sometimes large reserves of stock remain unused.

At present, with the pandemic at its worst stage, there is intense demand from people to be vaccinated. Most people appear to support the prioritisation schedule drawn up before Christmas that places nursing-home residents and staff, and frontline healthcare workers, at the front of the queue.

The problem lies with the lack of detail around the practical application of the rules. The Health Service Executive has passed on deliveries of vaccine doses to hospital groups, which have in turn supplied hospitals.

Although about 70,000 healthcare workers have been vaccinated, coverage has varied. In some hospitals all staff have received their first dose; in others, only some; and in others again, none.

Some hospitals promptly immunised all their eligible staff and even invited GPs and other community healthcare workers in to use up remaining supplies. Other hospitals appear to have generously offered vaccines to staff with no patient-facing roles. Anecdotally, people with no connection to the health service have been vaccinated in some locations.

How would you feel if you had spent the last year risking your life to treat seriously ill Covid-19 patients, and yet you were not getting the life-saving treatment accorded to other colleagues and even people outside the health service whose risk is minimal?

These issue mightn’t matter if the delay were short. However, immunisation of healthcare workers is being stopped for a week or two because of supply bottlenecks, the need to step up immunisations in nursing homes and the need to administer second doses.

There are also problems with the supply of the Pfizer/BioNTech vaccine for at least the next week as those companies attempt to ramp up production across Europe.

A related problem is the lack of real-time information about the roll-out of vaccines. Remember, Ireland differs from almost every other European country in not having a unique identifier for patients.

We still don’t have the promised daily report on the number of doses delivered and administered. Last week, Tánaiste Leo Varadkar admitted vaccinating in nursing homes and in healthcare settings was “a pen-and-paper exercise at the moment”.

A new IT system was supposed to have been ready before Christmas, in advance of the first vaccines being administered, but went live only on January 11th.

These are teething problems that can be ironed out but their persistence serves to undermine the overall programme.