Senator to run against Higgins to ensure election for presidency

Gerard Craughwell says democracy demands that all presidents ‘should be elected’ 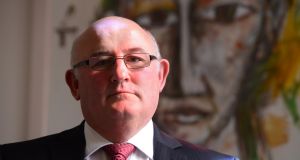 Independent Senator Gerard Craughwell plans to run as a candidate for the presidency next year to ensure there is an election.

A presidential election is not due to be held until October 2018. However, if no-one contests the election current president Michael D Higgins could be given a free run at a second seven-year term.

During the 2011 presidential election, President Higgins repeatedly said he would only stand for a single seven-year term.

However, since being elected, the president has refused to rule out the possibility of a second term in Áras an Uachtaráin.

Earlier this week, Senator Craughwell tweeted he was putting his name forward to ensure there was an electoral contest for the presidency.

“Seeking nomination for President. I have no money, I was late to education, I’ve struggled all my life. Yes I’ve no chance but democracy, yes, democracy demands that all presidents should be elected not agreed between political parties,” he wrote on Twitter.

Senator Craughwell said while Mr Higgins was doing a good job as President and he admired him, the President had stated he would remain for one term.

“Promises were made during the last election. Politics are being debased by broken promises. A promise was given - one term,” he told RTE’s Today with Sean O’Rourke show.

Senator Craughwell said he would go forward as a candidate in the presidential election if nominated to ensure there was a contest.

“I think people would vote for me. I’m an ordinary guy. I have lived through tough times; people threw me a life line. I have been given great chances.

“I’ve been broke. I’ve driven a truck. I served as a private soldier in the British army and in the Irish army. I started a business and it failed. I operated as a salesman. On each occasion someone threw me a lifeline.”

In order to secure a nomination for Áras an Uachtaráin a person must get the backing of at least 20 TDs and senators, or four local authorities.

Mr Craughwell first became a senator in 2014 and he is also a former president of the Teachers’ Union of Ireland (TUI).

There was no response from the Senator when contacted by The Irish Times for comment.