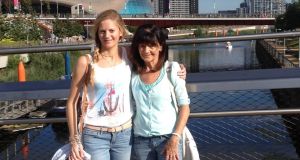 Dawn Ní Dhuibhir from Gort an Choirce in Donegal, with her mother Louis. Dawn has been diagnosed with Lyme Disease after being ill for 7 years. Louis spoke about it on Barrscéalta on RTÉ Raidió na Gaeltachta. Photograph: Joe Boland

A mother has called for improved awareness of Lyme disease in the Irish health system after her daughter Dawn was diagnosed with the disease seven years after first becoming ill.

Dawn Ní Dhuibhir, from Gort an Choirce in Donegal, was an athletic young woman and teacher in Falcarragh, but she has been unable to work since 2010 due to her illness.

Her mother Louis gave an emotional interview on Barrscéalta on RTÉ Raidió na Gaeltachta about what her daughter Dawn has been through since first becoming unwell in 2010.

“Dawn was a very athletic, then in 2010 she got very sick with a bad flu, she’d never had anything like that before, and afterwards she had a pain in her head that never went away and that was the start of it.

“We were going from doctor to doctor. She had a basketball injury and they were focused on that initially. It went on for the whole summer, and she went back teaching in September, but she only lasted until November and she had to stop then.”

Dawn explained on Barrscéalta on RTÉ’s Raidió na Gaeltachta that Dawn had not been able to teach since then.

She said that their lives had changed beyond recognition, as they were a family who enjoyed walking and the outdoors and had travelled all over Europe.

“Nobody knew what was wrong with her ... we went to so many doctors. Some of them thought it was all in her head, that’s the worst of it ... She has been particularly unwell since Christmas and has hardly left the house.

“She has terrible pain her head, back pain, sore knees, IBS, she can’t take light, noise, being out in the sun ... she can’t eat much either at the moment. She is in great pain but she hides it well. It has completely taken over her life.”

Dawn had been tested several times over the years for Lyme Disease and the results had come back negative each time.

However in the last few weeks the family sent a blood sample to Armin Labs in Germany, and within three or four days they had results to say that Dawn had Lyme disease with co-infections.

“We don’t know what to do next. She is too ill to take antibiotics. She could go to a clinic in Galway for an IV treatment, but they don’t accept results from the Armin Labs. People are talking about going to Germany or America for treatment, but Dawn is not well enough to travel.”

Dawn said that she felt that the medical profession in Ireland did not know enough about Lyme disease and how widespread it was.