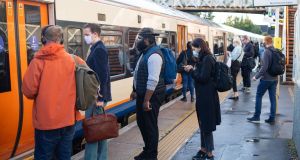 Commuters board a London Overground train in south Londonafter a range of new restrictions to combat the rise in coronavirus cases in England were announced. Photograph: Dominic Lipinski/PA Wire

Israel’s prime minister Benjamin Netanyahu’s cabinet decided on Thursday to tighten Israel’s coronavirus lockdown after he voiced alarm that a surge in infections was pushing the nation to “the edge of the abyss”, the YNet news site said.

Israel went back into lockdown, its second during the pandemic, on September 18th. But over the past week, the number of daily new cases has reached nearly 7,000 among a population of 9 million, severely straining the resources of some hospitals.

Revised edicts that take effect on Friday allow fewer businesses to operate and impose further curbs on travel, YNet said, after cabinet discussions that stretched from Wednesday to end early on Thursday.

“In the past two days, we heard from the experts that if we don’t take immediate and difficult steps, we will reach the edge of the abyss,” Netanyahu said in public remarks to the cabinet.

The British health secretary Matt Hancock said almost 10,000 people a day are contracting coronavirus — although still fewer than the “100,000 per day” estimated during the spring peak — and called on people to download the newly-released NHS tracing app to “make the country a safer place”.

Speaking to Sky News, he said: “The massive testing capability we’ve got helps to find where the virus is so, if you think about it, yesterday we had a figure that there is over 6,000 people who have tested positive in the previous 24 hours.

“And that is comparable to the highest levels in the peak in terms of the number of people who were tested positive but back then we estimate through surveys that over 100,000 people a day were catching the disease, but we only found around 6,000 of them and they tested positive.

“Now we estimate that it is under 10,000 people a day getting the disease — that’s too high but it is still much lower than in the peak — and through the mass testing we have and the quarter-of-a-million capacity, we found yesterday over 6,000 of them.

“That then allows us to do the contact tracing for everyone who has tested positive and find who they’ve been in contact with.

“In addition, today with the app, if you download the app you will also have that added protection for you and your loved ones.”

Poland reported 1,136 new coronavirus cases on Thursday, according to the Health Ministry’s Twitter account, the highest daily increase since the pandemic began.

Indonesia reported on Thursday its biggest daily rise of coronavirus infections with 4,634 new cases, bringing the total number to 262,022, data from the country’s health ministry showed.

It was the second day in a row posting a record increase, while the data added 128 deaths, bringing the total to 10,105.

In a bulletin, the ministry said total confirmed cases had increased to 296,755, still the highest in Southeast Asia, while deaths had reached 5,127, nearly half of which were recorded in the past 30 days. – Reuters