Rise in overcrowding blamed on increase in admissions of older patients 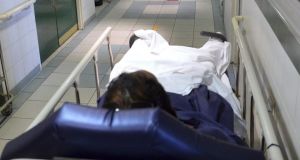 New figures showed the highest ever level of trolley overcrowding for the month of August. Photograph: Pierre Andrieu/AFP/Getty Images

The Health Service Executive says it is looking for extra resources for the winter from the Department of Health, after new figures showed the highest ever level of trolley overcrowding for the month of August.

There were 404 patients waiting for admission to hospital on trolleys or in wards on Tuesday morning, according to the daily Trolley Watch count by the Irish Nurses and Midwives Organisation (INMO).

The figure is particularly high for a summer month, and compares with 260 on the equivalent day last year. The total included 283 in trolleys and 121 in wards, with a majority of patients waiting in hospitals outside Dublin.

Some hospitals have seen their attendances increase by more than 30 per cent and their admissions rise by more than 50 per cent, according to a spokeswoman. “Some sites are continuing to experiencing these pressures during August.”

Winter planning was currently taking place and hospital groups were working to finalise their plans over the next four weeks, she said. “Discussions are continuing with the Department of Health regarding potential additional resources to mitigate the normal surge of presentations during the winter period.”

The INMO said the severe overcrowding was further compounded by poor staffing levels because of the recruitment and retention crisis in the health service.

In the first seven months of the year, more than 57,000 patients were left on trolleys because no bed was available to them, the union said.

Workloads, demands for services and staffing levels were also “extremely problematic” in community services, care for the elderly and intellectual disability, it added.

“The INMO will be raising these latest shocking figures, and the patient care issues which arise as a direct result, at the next meeting of the Emergency Department Taskforce next month. At this meeting we will seek additional funding, to recruit extra staff, to allow for the opening of extra beds.”