A shortage of beds, understaffing and lack of urgency at the top is contributing to the crisis 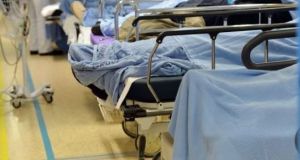 Recent reports have shown Ireland is making big strides in healthcare, but access remains the bugbear of the system.

Most analysts believe the hospital system is chronically deficient in beds. Successive Organisation for Economic Co-operation and Development reports show that Ireland has one of the lowest ratios of hospital beds to population internationally. The 2017 Sláintecare report estimated the system needed between 2,500 and 9,000 extra beds over the next decade, depending on what changes are introduced.

Sick patients requiring admission to hospital end up in holding mode on trolleys because well patients continue to occupy beds in the main section of their hospital. Many of these patients require step-down care, a place in a nursing home or adaptations or care arrangements at home before they can leave.

The number of such delayed discharges of care has been running well above average this winter, despite a drop over the Christmas period. Hospitals lost out on 220,000 bed days in the first 11 months of last year as a result. The reason for this can be traced back to spending cuts made after Paul Reid took up the post of HSE chief executive last year. With the HSE running massively over budget once again, spending on home help hours and transitional care was one of the first areas to suffer cutbacks.

3) A lack of consultants

We have too few doctors, especially consultants, relative to other countries. Too many Irish hospitals are overreliant on junior doctors, many of whom are unable to access training schemes to become consultants. More experienced doctors are constantly leaving, to be replaced by doctors who are often new to the Irish system. Up to one-quarter of junior doctors not on training schemes are from outside the EU.

The result is a paralysis of decision making and an overemphasis on caution. Inexperienced junior doctors are more likely to admit patients than more senior colleagues. Consequently, hospital beds are too often occupied by patients who may not need to be there.

University Hospital Limerick, the hospital with the worst overcrowding in the State, recently got a much-needed MRI machine. Such equipment is essential to ensure patients can be tested promptly and appropriate clinical decision can be made. However, Limerick’s MRI will operate only 9am-5pm, not 8am-8pm as it would in the private sector.

To make the best use of available resources – Irish health spending is relatively high in international terms – we need more work traditionally done by doctors to be carried out by grades such as advanced nurse practitioners, and more work done by nurses to be performed by healthcare assistants and other, newer grades. And we need more hospitals operating on a seven-day basis, rather than concentrating work on Monday to Friday.

5) The wrong resources in the wrong places

Again, to make the best use of resources, we need to focus them where they are most needed. Ireland has too many emergency departments (ED), maternity units – indeed, hospitals – for a country of its size. Doctors have been saying this for years, but the politicians, in thrall to their local interests, aren’t listening.

Too many patients are turning up in emergency departments who don’t need to be there. While patients without a medical card are supposed to pay €100 per visit, this is waived if they have a GP referral letter. Many could be treated in local injury units, but until last week the fee for these was the same – €100 (it has now been lowered to €75). Others could be referred directly to acute medical assessment units in hospitals, bypassing the ED, as happens in St Luke’s Hospital, Kilkenny, but hospitals have been slow to try this model.

Anyone on a trolley has been deemed to require admission to hospital, but as mentioned above, there is evidence that some patients are being admitted unnecessarily.

7) A lack of urgency

The emergency taskforce set up to deal with ED overcrowding – which is co-chaired by representatives of the HSE and the Irish Nurses and Midwives Organisation – met only three times last year. Minister for Health Simon Harris has consistently evinced more passion and arguably interest in social issues such as abortion or vaccines than in the seemingly intractable problem of hospital overcrowding.

Other factors include the flu – yes, it’s bad, but hardly unexpected – and the ageing population (again, no surprise there).

Finally, it’s worth remembering that trolley numbers is only one way of measuring the access problem in Irish health. It’s a crude metric. After all, patients on trolleys – while often in crowded, undignified locations – are receiving medical attention. Recent reports have shown Ireland is making big strides in healthcare – longer life expectancy and improved survival rates from stroke and heart attack, for instance – but access remains the bugbear of the system.