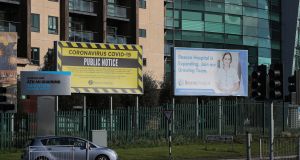 The chief executive of the HSE Paul Reid has criticised the private Beacon Hospital in south Dublin for not signing up to an agreement to provide additional capacity to the HSE to deal with the current surge in Covid-19 cases.

Mr Reid said it was “beyond belief and comprehension” and urged the board of the hospital to sign up to the ‘Safety Net Agreement’ which sees private hospitals provide additional capacity to the HSE.

“We’ve had very constructive discussions with all private hospitals over the past two weeks.

“I’m very pleased to say 17 out of the 18 private hospitals have now signed up to that Safety Net Agreement which gives us capacity of up to 30 per cent, but can go beyond that as required.

“However, I do have to genuinely express my extreme frustration that the Beacon hasn’t signed up to that agreement. We have our public health system facing the biggest crisis probably in the history of the State,” Mr Reid told RTÉ’s Saturday with Katie Hannon show on Saturday.

“We’ve a team of fantastic people working across our hospitals, including private, working relentlessly but we are racing to save people’s lives here and it is beyond frustration for me, and it is beyond belief and comprehension and I would be urging their board to sign up to the agreement.”

Following Mr Reid’s comments the Beacon issued a statement and said it was “already wearing the green jersey - doing all that it can to support the public system during the ongoing public health crisis”.

“Beacon Hospital is treating more public patients than any of the 17 other private hospitals,” it said in a statement.

The hospital said it had declined to sign an additional centralised agreement because it was “not willing to give clinical governance to the HSE”.

“The last HSE agreement, which Beacon Hospital signed up to, in April to June last year, allowing the HSE take clinical control, led to the hospital being 70 per cent empty for three months,” it added.

“As Beacon Hospital is at full capacity now, treating both private and public patients, we cannot take the risk of allowing HSE direct clinical governance lead to under-utilisation.”

The hospital said public patients occupied more than 55 per cent of beds in ICU and approximately 15 -20 per cent of all surgery for the last four months, “on behalf of public hospitals such as the Mater Public, St James’ Hospital, Tallaght, Children’s Health Ireland (Crumlin), Tullamore and University Hospital Limerick under existing arrangements.”

Mr Reid also confirmed the Beacon Hospital is being used as a vaccination centre.

“That was provided purely at no cost to the HSE by the Beacon and we’re grateful for it,” he said.

“It [THE HOSPITAL]provided it [THE CENTRE]just last week and 1,000 of our staff were vaccinated there, again by volunteer vaccinators from the Beacon.”

Mr Reid said “very small, marginal numbers” of staff at the Beacon and the Hermitage private hospitals had been vaccinated.

“In terms of the Beacon staff being vaccinated, the Beacon and indeed other private hospitals, there is no distinction of a vaccination of primary health care workers in our sequencing so it is for private and public,” Mr Reid said.

“Secondly, the private hospitals do carry out very important work for us, including the Beacon, which would be urgent critical care, cancer, oncology, cardio. Protecting healthcare workers in private and public is important for us.”

Mr Reid also said a consignment of vaccinations had was issued to Nenagh Hospital in Co Tipperary on Saturday morning.

A video was posted on social media this week of healthcare workers at the hospital pleading with the Taoiseach and Minister for Health to begin the rollout of the vaccine there.