High-protein diet could be as dangerous as smoking - study 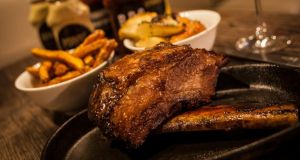 Animal-based proteins such as red meat, milk, and cheese were most harmful, but there is no evidence to suggest that protein from fish has a negative impact, said the study author. Photograph: Ed Alcock/The New York Times

A high-protein diet could be as dangerous as smoking 20 cigarettes a day, a new study has found.

Research from the University of Southern California shows that high levels of dietary animal protein in those under 65 were associated with a fourfold increase in their risk of death from cancer compared to those on a low protein diet.

This is an increased mortality risk associated with a 20-a-day smoking habit.

The study of 6,318 adults over the age of 50, found that protein-lovers were 74 per cent more susceptible to early death from any cause than their low-protein counterparts. They were also several times more likely to die of diabetes.

A “high-protein” diet was defined in the research as deriving at least 20per cent of daily calories from protein. The researchers recommend a middle-aged person consume around 0.8g of protein per kilogram of body weight, per day.

Even small changes that reduced someone’s protein intake from moderate to low levels cut the likelihood of an early death by over a fifth. A “low-protein” diet includes less than 10 per cent of your daily calorie intake from protein.

Animal-based proteins such as red meat, milk, and cheese were most harmful, but there is no evidence to suggest that protein from fish has a negative impact on the body, said study author Dr Valter Longo, Professor of Biogerontology at the USC Davis School of Gerontology.

“High levels of protein can be can be as bad for you as smoking. People should understand the distinction and be able to make the decision about what they eat,” said Dr Longo.

“Some proteins are better for you than others, for example plant-based proteins like beans. Vegans seem to do better in studies than those who eat animal based proteins. Red meat always comes out top as the worst and that’s probably due to its other components.”

“But the good news is that there is no evidence that fish is bad for you. So fish plus vegetables is really the best group of proteins,” added Dr Longo.

The findings throw doubt over the long-term benefits of popular high-protein diets such as the Atkins diet and the Paleo diet.

Protein levels controls the growth hormone IGF-I, which help bodies grow but high levels of which have been linked to cancer.

Levels of IGF-I drop off dramatically after age 65, leading to potential frailty and muscle loss. The study shows that while high protein intake during middle age is very harmful, it is protective for those over 65 who ate a moderate or high-protein diet.

Dr Longo, who skips lunch, recommends a diet high in complex carbohydrates and low in protein.

“I follow a fish and vegetable based diet which is high in complex carbohydrates. This is a diet that has been found in the most long-lived populations of the world,” he said.