GPs need to be told about errors in medical tests, patient group says

Major investigation now underway to establish the extent of the issue 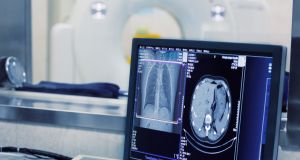 At least 25,000 X-rays, MRIs, CTs and ultrasounds taken since 2011 are affected by the error. Photograph: iStock

The Chairman of the Irish Patients Association, Stephen McMahon, is calling on the HSE to ensure General Practitioners are fully informed on the cases of patients who may have had their medical tests misidentified.

“It was shocking news to find out that so many patients were affected by a bug in the system.”

Thousands of patients across the State may need to have their medical tests redone after a major flaw was identified in the Health Service Executive’s (HSE) computer systems.

Others may have received unnecessary treatment as a result of faulty information on the HSE’s system for storing scans electronically.

At least 25,000 X-rays, MRIs, CTs and ultrasounds taken since 2011 are affected by the error, which was discovered only last week.

The HSE says it does not know to what degree patients may be affected, but a major investigation is now under way to establish the extent of the issue.

Mr McMahon told RTÉ’s Morning Ireland that the news shows how dependent the system is on computers. He said he was concerned about patients who might have needed treatment and did not receive it because of this problem.

Clinical guidelines should be introduced by the HSE to help allay concerns.

“The key thing here is to inform patients - as many as possible - to make sure they are not stressed.”

He also pointed out that there are already 50,000 people on waiting lists which would come under further pressure if patients need to be retested following the uncovering of the problem of misidentification.

Mr McMahon called on the HSE to ensure patients and their GPs are kept informed and that resources are available to ensure rescanning or retesting and treatment if necessary along with access to care.