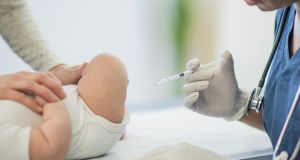 The vaccine covers seven serotypes of the disease and is given to infants in three doses before the age of 13 months. Photograph: iStock

One of the main diseases leading to pneumonia and other life-threatening conditions has become far less common since the introduction of a nationwide vaccination programme almost a decade ago, according to a report.

Since the introduction of the pneumococcal vaccine into the national immunisation programme in 2008, there has been a significant decline in the overall burden of the disease, particularly among young children, the HSE says.

The vaccine covers seven serotypes of the disease and is given to infants in three doses before the age of 13 months.

Since 2008, there has been a 90 per cent fall in the cases caused by the seven serotypes, rising to 100 per cent among children aged under five years.

However, cases caused by serotypes not covered by the vaccine have risen, so overall the reduction in the burden of the disease is 20 per cent, according to the report by the HSE’s Health Protection Surveillance Centre.

It notes the same dramatic impact of the vaccine has been seen in other Europeean countries which have introduced it in their vaccination programmes in the past 15 years.

The Centre says we do not know the impact of the disease because of incomplete data, thereby hampering efforts to assess its true impact.

A vaccine which offers protection against 23 serotypes is already recommended for elderly and risk groups, it points out.

Pneumococcal disease, caused by the bacteria Streptococcus pneumonia, is a major cause of illness and death, particularly amongst the very young, the very old or those with weakened immunity. There are over 90 different types of the bacteria, which is spread by coughing, sneezing or close contact.

The bacteria can be carried in the nose and throat without doing any harm but sometimes they can invade the lungs and bloodstream causing pneumonia, septicaemia and meningitis.