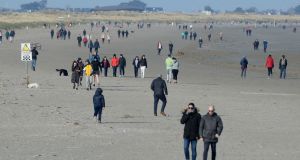 Dollymount beach on Sunday. The proposals have been drawn up following concerns that large groups of people who gather at beaches, mountains and walking routes – as during fine weather over the weekend – could be helping the spread of coronavirus. Photograph: Alan Betson

Gardaí and local authorities may be told to close public spaces where social distancing is not being practised, under new measures being considered to limit the spread of coronavirus.

The proposal comes as the death of a fourth person from the virus, also known as Covid-19, was announced on Sunday and concern grew over the backlog of people awaiting testing for the disease.

More than 40,000 people are awaiting a test, with the average delay four to five days, HSE officials said on Sunday. Adding the time it takes to process the test, many patients are waiting a week to find out if they have the disease.

Acknowledging the delays, HSE chief executive Paul Reid said 40,000 testing kits were being distributed at the moment and 20,000 more would be available on Wednesday. He said the HSE was in advanced negotiations with China to secure another 100,000 kits. Testing will be available at 41 centres nationally from Tuesday.

Cork GP Dr Nick Flynn described the backlog of people waiting for tests as “a problem”.

“The success or failure of our delay strategy is all about early diagnosis of the disease and early contact tracing. It’s not good enough simply to say that people waiting for a test are self-isolating.”

Dr Flynn said it would also be helpful to know what percentage of tests carried out so far are still awaiting processing.

The new movement restrictions, which may be applied to areas such as beaches, parks and caravan parks that become overcrowded, are due to be considered by the National Public Health Emergency Team tomorrow.

The proposals have been drawn up following concerns that large groups of people who gather at beaches, mountains and walking routes – as during fine weather over the weekend – could be helping the spread of the disease.

The emergency team is also likely to recommend the extension of existing restrictions on mass gatherings and the closure of schools beyond March 29th.

On foot of concerns raised by doctors about a shortage of personal protective equipment when treating patients with Covid-19, Mr Reid said the health service had “a good stock overall”.

Aer Lingus is expected to air-freight the consignment from a Chinese warehouse to Ireland shortly. The amount of equipment involved represents 13 years of normal supply.

Dr Donal O’Hanlon, president of the Irish Hospital Consultants Association wrote to Minister for Health Simon Harris on Friday, saying that doctors across the country were reporting widespread shortages of personal protective equipment. He said stocks were “running out” in some locations, “leaving frontline staff and their patients in extremely exposed positions”.

The fourth person to die in the Republic was a male patient in the east of the country. A further 121 new cases were confirmed on Sunday evening, bringing the total to 906.

While this is below the 1,300 forecast under the Government’s modelling, this is not regarded as significant because the outbreak is still at an early stage.

However, public health doctors carrying out contact tracing are finding that the majority of contacts of confirmed cases are mostly household members, according to chief medical officer Dr Tony Holohan.

This appears to show that, as in China, most people get the disease from a family member rather than in the wider community.

Northern Ireland on Sunday recorded a second death, 20 new cases and a total of 128 cases of the disease.

Referring to the record 793 deaths recorded in Italy on Saturday, Mr Reid said Ireland can “make it so different” but needed to grasp the opportunity to save lives over the next seven days.

The Department of Education said there was no intention “at this moment” to cancel or postpone the Leaving or Junior Cert exams this summer.

Senior Government officials are due to meet today to discuss proposals for providing childcare for essential healthcare workers during the coming months.

All McDonald’s restaurants in the UK and Ireland will close by 7pm on Monday at the latest to protect the safety of their employees and customers, the company said last night.