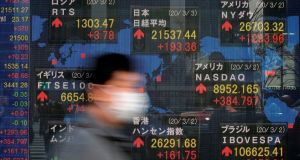 With global uncertainty, almost 36 per cent has been wiped off the value of Irish shares so far this year, with the Euro Stoxx 50 index having fallen by 32 per cent. Photograph: Kazuhiro Nogi

The lender, led by chief executive Billy Kane and in which the State’s Ireland Strategic Investment Fund and US investment giant Pimco each own 31 per cent stakes, had been targeting a stock market flotation in May with its advisers in Goodbody Stockbrokers, subject to market conditions.

Sources said the IPO had been put on hold indefinitely as financial market chaos, caused by virtual lockdown of the global economy as governments and health authorities seek to contain the advance of Covid-19, had hit the stocks of lenders internationally in particular.

A spokesman for Finance Ireland declined to comment on the situation surrounding the IPO plans.

Unprecedented efforts by states and central banks to limit the economic fallout have failed to quell concerns that a global recession is in the offing, as the number of cases of coronavirus has soared past 300,000 over the weekend and the death toll exceeded 13,000.

Almost 36 per cent has been wiped off the value of Irish shares so far this year, with the Euro Stoxx 50 index having fallen by 32 per cent, as Europe has found itself at the epicentre of the crisis.

Even before the virus outbreak, growth across the Europe Union had flatlined, with gross domestic product expanding by just 0.1 per cent in the fourth quarter of 2019, according to figures from Eurostat, the union’s statistics office.

Stockbrokers Davy warned on Friday that while the Irish economy had stood out as a bright spot across Europe in recent years, it could contract this year if the coronavirus was not brought “under control quickly”.

Davy said it was, for the moment, holding back from revising down its current forecast for 5.5 per cent growth for 2020 because of the highly uncertain environment.

In the middle of February, when The Irish Times reported that Finance Ireland had been working towards a May flotation, the biggest potential issue seen as potentially affecting the timing was political uncertainty caused by the inconclusive outcome of the February 8th Irish general election.

At the time, western financial markets were riding high, as investors concluded that Covid-19 was largely a Chinese health issue, albeit one that affected supply chains and manufacturing plans for companies internationally.

Finance Ireland’s loan book – including leasing finance to SMEs, motor finance, agri-lending and a property portfolio – breached the €1 billion mark in 2018 as new lending grew by 13 per cent to almost €500 million. It has not issued figures for 2019 yet.

The company, which traces its roots back to 2002, also launched its own home loans product last March, having entered this segment of the market at the end of 2018 with its purchase of a €200 million home loans book from KKR-owned Pepper Money, which was exiting this line of business.