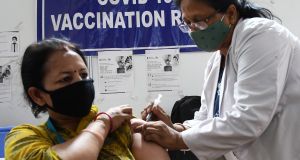 A woman gets a dose of a Covid-19 vaccine in New Delhi, India. Some 11 million have received two doses in India as the country tries to build immunity to protect its population of nearly 1.4 billion people. File photograph: EPA

India has recorded its highest-ever number of daily Covid-19 cases as its fight to curtail a renewed wave of infections is beset by vaccine shortages in several states and cities, including Mumbai.

New coronavirus cases in India hit a daily record of 126,789 on Thursday, as prime minister Narendra Modi got his second vaccine dose and urged others to follow suit, saying “vaccination is among the few ways we have to defeat the virus”.

India has recorded 12.8 million Covid-19 cases since the start of the pandemic, the most after the United States and Brazil. It started its vaccination drive in January, and so far more than 90 million health workers and those aged over 45 have received at least one dose.

Only 11 million have received both doses as the country tries to build immunity to protect its population of nearly 1.4 billion people.

Dozens of cities and towns are imposing night curfews to try to contain the surge but the federal government has refused to impose a second nationwide lockdown for fear of hurting the economy.

Fatalities related to Covid-19 rose by 685 in India in the past 24 hours, the highest since November.

The western state of Maharashtra, the worst hit in the country, accounted for nearly 47 per cent of new infections.

New Zealand on Thursday temporarily suspended entry for all travellers from India, including its own citizens, for about two weeks following a high number of positive coronavirus cases arriving from the south Asian country.

The move comes after New Zealand recorded 23 new positive coronavirus cases at its border on Thursday, of which 17 were from India.

The suspension will start from 4pm local time on April 11th and will be in place until April 28th. During this time the government will look at risk management measures to resume travel.

The suspension applies to anyone who has been in India during the past 14 days. It is the first time that New Zealand has extended any bar on entry to its own citizens and residents.

“I want to emphasise that while arrivals of Covid from India has prompted this measure, we are looking at how we manage high-risk points of departure generally. This is not a country-specific risk assessment,” prime minister Jacinda Ardern said.

New Zealand has virtually eliminated the virus within its borders, and has not reported any community transmission locally for about 40 days. But it has been reviewing its border settings as more infected people have been arriving recently, most of them from India.

Pre-departure testing requirements reduced the number of positive cases coming from other countries but that’s not been the case with India, Ms Ardern said. “We have looked into whether or not we have issues with accuracy of the pre-departure tests.”

New Zealand on Thursday also reported one new locally-infected case in a worker who was employed at a coronavirus managed isolation facility.

Philippine health authorities suspended on Thursday the use of AstraZeneca’s Covid-19 vaccine for people below 60 years of age to investigate reports of blood clots coming from overseas.

The temporary suspension came after the European Medicines Agency recommended to include blood clots as a rare side effect of the vaccine, Food and Drug Administration chief Rolando Enrique Domingo said in a statement, adding that there were no reports of such adverse side effects in the country.

The Philippines has so far received 525,600 doses of AstraZeneca’s vaccines, about a fifth of the country’s total inventory, through the Covax scheme which aims to guarantee fair and equitable access to vaccines for every country in the world.

Its decision follows the UK vaccination advisory body’s recommendation to offer an alternative vaccine to the AstraZeneca jab to healthy adults under the age of 30 if there is one available in their area. Germany, France, Belgium and Spain have also opted to restrict the vaccine to older groups, while other countries, such as Norway and the Netherlands, have suspended it entirely. Meanwhile, Austria’s national vaccine panel recommended the country keep using AstraZeneca’s vaccine for all age groups and genders. The benefits still outweighed the risk of the vaccine in all populations, the body said in a statement.

Health authorities fear a virus variant is unleashing a fourth wave of infections just 107 days before the Tokyo Olympics begin, with a vaccination drive still at an early stage.

The prefecture reported 878 new infections on Wednesday, a second-straight day of record numbers. Severe cases have filled about 70 per cent of hospital beds in the region.

Osaka and the neighbouring prefectures of Hyogo and Miyagi started on Monday a month of targeted lockdown measures, to rein in a more virulent strain of the virus.

Governor of Tokyo Yuriko Koike said she was preparing to ask the central government to designate the capital as another area that requires stricter measures, adding that the number of cases with the N501Y mutation – considered more contagious – was quickly increasing in the Japanese capital.

Japan’s vaccination drive is far behind that of most major economies, with about 1 million people being given at least one dose since February.

That figure represents less than 1 per cent of the population, versus almost 2 per cent in neighbouring South Korea, which started its campaign after Japan.

Brazil, which has the world’s highest death toll, has recorded its first confirmed case of the highly contagious coronavirus variant discovered in South Africa.

The Federal University of Minas Gerais said in a statement that two samples taken in the inland city of Belo Horizonte included a previously unseen set of 18 mutations, including some in the same genes modified by the South African variant and Brazil’s already prevalent variant, known as P1.

On Tuesday, the health ministry reported a single-day record of 4,195 deaths, followed by another 3,829 fatalities on Wednesday.

Sao Paulo, the country’s biggest city, said it would begin opening some 600 new graves per day, well beyond the record of 426 burials in a day on March 30th. The city is also preparing plans for a “vertical cemetery”, a crypt with 26,000 drawer-like graves that can be built in 90 days once approved.

The outbreak in South America’s largest country may overtake the United States to become the world’s deadliest, some medical experts predict.

A possible surge of the South African variant could further complicate Brazil’s slow vaccine rollout. Immunisations have been slow to ramp up in Brazil after the government dragged its feet last year in acquiring vaccines while other countries raced to secure supplies.

President Jair Bolsonaro has shifted his tone on vaccines, touting shots he had until recently disdained. But the far-right former army captain still opposes social distancing and mask requirements that health experts see as essential for curbing virus transmission.

Under pressure from business leaders desperate to vaccinate their workforces and reopen operations, the lower house of Congress approved a controversial Bill to allow private-sector vaccine purchases. The Bill will now go to the Senate for consideration.

The proposal would allow businesses to acquire vaccines to inoculate their employees as long as they donate the same number of shots to the public health system. Under current rules, businesses could only do that once the country has fully vaccinated risk groups outlined in a national immunisation plan.

The B117 variant, first found in the UK, has overtaken the initial form of the virus in the US and is now the country’s most common strain, according to the head of the Centers for Disease Control and Prevention.

US president Joe Biden will offer Covid-19 vaccine shipments to all of the nation’s community health centres, adding 2,500 delivery sites in a programme aimed at closing the racial gap in inoculations.

In Alabama, governor Kay Ivey lifted the state’s mask mandate, saying the order would go into effect on Friday. Individuals are still “strongly encouraged” to wear face coverings when in public or in close contact with others, the governor said in a statement. Texas and Indiana also dropped their mask mandates.

In Denver, 11 people suffered adverse effects such as nausea and dizziness on Wednesday after receiving the Johnson and Johnson Covid-19 vaccine at a community vaccination event, the Colorado department of public health and environment said. Two of the people were transported to hospital for observation “out of an abundance of caution” and the others received first aid at the site in Commerce City, the department said.

Mexico’s foreign secretary Marcelo Ebrard will soon travel to the US to press for more vaccines from its northern neighbour to help get through a supply crunch during the next three months, Mr Ebrad’s deputy said.

Delgado said Mexico had a “permanent petition” for any available vaccines from the US, such as the AstraZeneca shot that has yet to be approved by regulators there.

Canada’s largest province, Ontario, which is home to more than 14.7 million people, has declared a state of emergency, forcing most retail stores to operate under new restrictions. It said it would change its inoculation strategy as it battles a new, more dangerous Covid wave.

A stay-at home order for the region started on Thursday and will remain in place for four weeks. Most shops will be required to shut their doors, serving customers only through delivery or outdoor pick-up.

Italy’s government is working on plan to make “Covid-free” islands, including Capri, Ischia, Ponza and Elba, by the summer in order to save the tourist season, newspaper Il Messaggero reported. Vaccinations of local residents will be prioritised, following in the footsteps of Greece, according to the report.

Uruguay could start to see the benefits of its vaccination programme as soon as late April or early May, president Luis Lacalle Pou said. Some 860,000 people will have received two CoronaVac doses by the end of May, and the government is seeking more vaccines in case it decides to inoculate people under the age of 18 or give adults a third dose.– Bloomberg, Associated Press, Reuters