Study found that 9% of those with condition died compared to 0.7% of general population 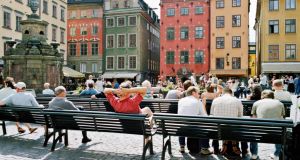 Stockhold, Sweden, where the study into epilepsy was carried out

People with epilepsy are 11 times more likely to die early than people without the condition, according to research published today.

The research, published in The Lancet medical journal, has “significant public health implications” since 70 million people around the world are diagnosed with the condition, said lead researcher Seena Fazel of the University of Oxford.

The study tracked almost 70,000 people with epilepsy in Sweden between 1954 and 2009 and compared their outcomes with 660,000 age and sex-matched people, along with 82,000 of their siblings born without epilepsy.

About 9 per cent, or 6,155 of those with epilepsy, had died compared with just 0.7 per cent of those in the general population who were examined.

Of those who died, one-in-eight had died by suicide, accidents or assaults.

While the study confirmed those with epilepsy are 11 times more likely to die early than people without the condition, it did not say how much earlier they were likely to die.

Researchers found that three-quarters of those with epilepsy who died from accidents or suicide had also been diagnosed with a psychiatric condition during their lifetime.

“The findings showed that people with both epilepsy and substance misuse were 22 times more likely to die from external causes than those with neither condition,” said The Lancet.

The majority of early deaths from external causes were from suicides, where the odds of dying in such a fashion were four times higher than for the general population of Swedes examined.

Of those dying by their own hand, violently, or because of accidents, who had been diagnosed with a mental illness, more than half were addicted to drugs, or alcohol, while a quarter were depressed.

“External causes of death were strongly associated with psychiatric conditions, and we conclude that premature mortality in epilepsy might be reduced with improved identification and treatment,” the research said.

The need to offer epileptic patients help to avoid dying violently is “underscored” by the research, particularly those who have just been diagnosed since they represent “a high-risk population”.

Compiling the figures, researchers examined cause-of-death reports for all those who died between 1969 and 2009, which outlined the detailed circumstances of each case.

Ley Sander from University College London’s Institute of Neurology said the treatment of the psychiatric and substance abuses addictions of many epileptics should be “an important part” of their care plans.

Epilepsy Ireland estimates there are 30,000 to 40,000 people in Ireland with the condition.