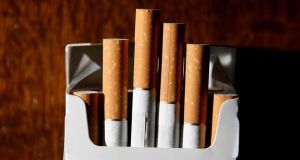 Anyone who breaks new laws imposing plain packaging on all tobacco products could face up to eight years in jail, according to the text of Minister for Health James Reilly’s proposed legislation.

The Public Health (Standardised Packaging of Tobacco) Bill 2014, published on Friday, provides for the imposition of penalties both on individuals and “body corporates”.

The legislation will not take full effect until May 2017 to allow for the dissipation of existing supplies of tobacco products bearing manufacturers’ names and logos.

The department said it would be published shortly.

The Bill gives the Minister the power to prescribe the manner in which the brand name of a cigarette may be printed on a cigarette packet. The Minister will decide the form of packaging used, including the colour, font, size, positioning and appearance of a brand name.

In prescribing these elements, he will have regard to the need to decrease the appeal of cigarettes, increase the effectiveness of health warnings and “reduce the ability of retail packaging of cigarettes to mislead consumers about the harmful effects of smoking”.

Tobacco companies will be allowed to print a brand name or company name once on three surfaces of the packet, provided this does not obscure or interfere with health warnings.

A person found guilty of an offence will be liable on summary conviction in the District Court to a €4,000 fine and/or six months in jail. Repeat offences are punishable by a €5,000 fine and/or a 12-month jail sentence. More serious offences may result in a fine or imprisonment for up to eight years on indictment. Offenders will also be levied, with the legal costs incurred by the HSE.

When an offence is committed by a body corporate with the “consent or connivance” of staff or their “wilful neglect”, cases may be taken against both entities.