Kathy Ryan and Ronan Smith, who were both diagnosed in their 50s, tell their stories 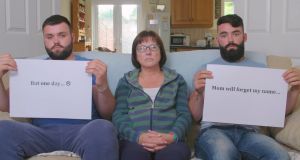 Kathy Ryan with her sons Matt and Andrew: “Being an advocate has given me a purpose that I’m still useful and I can still do things, although I have challenges,” she says.

Kathy Ryan: “A big gaping hole of nothingness” stared back at Kathy Ryan when she was first diagnosed with early-onset dementia at 53 years old. Kathy, who has two sons in their early 20s, says when she first found out she had Alzheimer’s disease almost three years ago she was “completely devastated”.

Before this she had noticed she had started to forget words and struggled with some short-term memories. “I was officially diagnosed on January 23rd, 2014, but I’ve had issues with my memory before then. I’m one of the 5,000 in Ireland diagnosed under 65,” she said. “The knee jerk reaction is do you give up work? What’s next? What can be next?”

Kathy, who lives in Cashel, Co Tipperary, says she wanted to find something she could do despite her condition and to fight the progression of Alzheimer’s.

“Life hasn’t ended because of the diagnosis. There are things you can do to stay well for as long as possible,” she says.

Kathy has committed herself to advocacy for the disease, worked on research projects and become a member of the Irish Dementia Working group.

“Being an advocate has given me a purpose that I’m still useful and I can still do things, although I have challenges,” she says.

Kathy said the campaign for people to learn about dementia was very important to families across Ireland.

“Some people have been very rude and walked away from me, probably out of embarrassment or fear of what to say. Don’t be afraid of us. I didn’t change the day of my diagnosis,” she says. “If you’re being shamed and shunned out there, what are you going to do only back away. I didn’t but many do. The public learning a little would help a lot. The doctors tell you stay socially engaged.”

Ronan Smith: Do not cross the road to avoid meeting a person you know with dementia, just say, “How are you?’, ” says Ronan Smith who was diagnosed with Alzheimer’s disease in his 50s.

Ronan, who was diagnosed with early-onset dementia he was just 56, says people often react with awkwardness and fear around the condition.

“Just say normal things that you would with other people. How are you? Isn’t it a lovely day? Words will follow. Once you start it’s easy,” he says.

“Diagnosis doesn’t mean we immediately lose our skills and abilities, our need to belong and share or, above all, our sense of dignity. The person is a lot more than the condition.”

Ronan, who has a daughter and son in their early 20s, is no stranger to the condition having cared for his father who developed dementia in the 1980s.

From his previous experience as a carer, he recognised his own symptoms and went for tests to his GP. He was officially diagnosed almost three years ago.

Ronan was determined he would not let the condition hold him back and immediately went to work in advocacy while continuing his work in the Gaiety Theatre. “I had a lot of background and awareness as I had volunteered with The Alzheimer Society of Ireland when Dad had it,” he said.

“But the stigma is still attached to the condition, there’s a great deal of discomfort people have about it.

“Why should you be ashamed of an illness? There’s no good reason. People get ill, that’s part of life. There’s no reason to be embarrassed.”

Ronan, who is a member of the Irish Dementia Working group, said he passionately believed people needed to talk more about the condition.

“Life doesn’t end when dementia begins. People with dementia can and do live meaningful, active lives for many years.” he says.

Coursing may not resume during Level 5 Covid-19 restrictions, judge rules 16:49
Man to be tried over threats to family of murdered Cameron Blair 16:44
Five years for man ‘abandoned’ by accomplices during armed robbery 16:12
Doctor who helped woman urges society to call out coercive control 16:05
Fifteen junior doctors receive over €100,000 in overtime pay amid Covid-19 pressures 16:01