Project Restart: Premier League players to be given chance to air any concerns 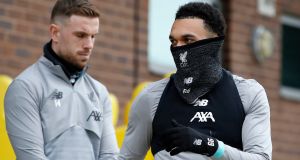 Players will be consulted on the Premier League’s proposals before a select group hold talks with league officials. Photograph: PA

Top-flight players are to hold talks with Premier League executives next week, before any attempt to restart the football season can be signed off.

Players are to be given the chance to air any concerns over Project Restart in a video-conference call likely to include representatives of all 20 clubs.

The discussion will follow the Premier League shareholders meeting on Monday, when finished versions of protocols defining a return to training and competitive matches are to be debated. In a process set to involve the English Professional Footballers’ Association and the League Managers Association, players will then be consulted on the proposals before a select group hold talks with league officials.

Sheffield United’s manager, Chris Wilder, said on Thursday that he would allow players to opt out if the season restarts. “If any individual player took that decision and came to me and said, ‘It’s not for me,’ I’d respect that,” he told BeIN Sports.

Football faces a decisive seven days as the UK government advice on the potential easing of lockdown restrictions, due on Sunday night, sets in motion a train of events that will determine the game’s immediate future.

Last week the league and its shareholder clubs agreed that players and managers “are key to the process” of restarting play, but largely their voices have been absent from any debate.

While some prominent figures such as Manchester City’s Sergio Agüero and the West Ham manager, David Moyes have aired concerns, there is uncertainty as to what a majority view may be over any return. Burnley’s manager, Sean Dyche, articulated a more positive position this week when he said: “We are very pro the idea of moving forward, when we can of course and when it’s safe, and the players are clear-minded about that as well.”

The league has taken further steps to enable the testing of players and staff for Covid-19. It is expected to agree a deal with a Hong Kong-based company, Prenetics, for the provision of 40,000 home testing kits.

The testing plan, still to be approved by clubs, would involve players and staff being tested twice a week during a three-week training period and the expected seven-week match schedule. Tests would be ordered centrally before being distributed to the clubs and the total cost is anticipated to reach £4m.

With a shortage of testing having been a consistent problem in the UK’s response to coronavirus, the league has said it would acquire tests only if it did not affect the needs of Public Health England and the NHS. With national capacity now regularly exceeding the number of tests carried out, this political concern is believed to have reduced. The league is also expecting to acquire personal protective equipment, primarily for staff running the testing sites.