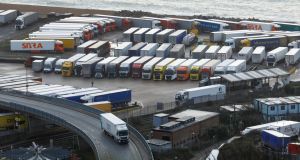 Trucks parked near the Port of Dover in southern England on Tuesday. The Irish haulage industry wants exemptions from Covid testing for Irish drivers ‘transiting’ through the UK on their way to mainland Europe. Photograph: Luke MacGregor/Bloomberg

Everyone was expecting it but many were surprised that it was Covid-19 and not Brexit that delivered the nightmare before Christmas.

The long queues of lorries clogging up English roads to ports on Britain’s southern coast had long been threatened, but they arose not as a result of Brexit but because of France’s ban on road freight on ferries across the English Channel to stop a more contagious coronavirus variant.

It could not have happened at a worse time. It fell in a short week ending with Christmas as pre-Brexit stockpiling and end-of-year supply chains had already clogged up busy transit routes, choked shipping lines and filled up warehouses in anticipation of this mess happening later.

There have been lots of lessons learned since Sunday’s ban and plenty of “I told you so” mutterings from industry groups that had warned that Ireland, as an island off an island, was not ready if our neighbour became snarled by road traffic stuck at British ports.

This has been an ugly dress rehearsal for the January 1st introduction of a deluge of customs paperwork, complex health checks and heavy levels of bureaucracy, courtesy of Brexit.

The prospect of Covid-19 testing for lorry drivers heading into France as a solution to the ban, regardless of how long test results take, will add another obstacle on the already heavily congested “landbridge” transport route through Britain between Ireland and mainland Europe.

The Irish haulage industry wants exemptions from testing for Irish drivers “transiting” through the UK on their way to mainland Europe.

“It would cause too much grief,” said Eugene Drennan, president of the Irish Road Haulage Association, arguing that an Irish lorry driver with a transit document should be waved through without the requirement for a test.

Hauliers say their lorry cabs act as “bubbles” from the virus.

The European Commission said on Tuesday that, as essential transport workers, lorry drivers should be exempted from Covid-19 testing and quarantine.

“This whole episode raises an awful lot of question marks about the viability about the landbridge,” said Simon McKeever, chief executive of the Irish Exporters’ Association.

While many companies had been preparing for December 31st, they were taken by surprise at the very sudden shutdown of the landbridge by Covid-19.

“I don’t know if the landbridge is dead yet but it certainly isn’t working very effectively at the moment for roll-on, roll-off freight,” said Mr McKeever.

Minister for Foreign Affairs Simon Coveney has gone so far as to tell businesses not to rely on the route over the coming weeks as post-Brexit border controls, paperwork and complicated sanitary checks come into effect. If they want certainty, take the direct ferry, he said.

The haulage industry has been up in arms for several weeks now, complaining that there was not enough capacity on direct ferries to take the 170,000 lorries that cross the landbridge every year, and rubbishing an Irish Maritime Development Office report saying that there was.

They have pointed to the chaos at British ports and the scramble by Irish companies to re-book onto direct routes that still do not yet offer a daily service as proof of their claims.

“Never in all my born days I have seen anything like the inconsistency, the inefficiency and lack of preparation – there is no plan,” said Independent TD Verona Murphy, a haulage firm boss and former representative of her industry, at the lack of preparation for what landed this week.

Mr Coveney has said that if the traffic cannot pass through Britain, the ferries companies will be ready to move the lorry-carrying ships to the direct routes: to Cherbourg, Roscoff and Dunkirk.

With Brexit disruption on the horizon, Irish companies relying on quick deliveries of fresh fish, meat and other food will need more people to react just as quickly.