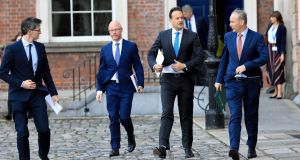 If anything is clear at this stage about Covid-19, it is that the disease is here to stay.

The prospect of a vaccine being developed is an alluring one, but some way off. That means Ireland and other countries battling the virus have to work with the available science to minimise infections, hospitalisations and deaths.

It is equally clear there is no going back to the emergency of last March. Nations nearly everywhere are struggling to eliminate Covid-19 but they have nonetheless learned how to contain it.

Public health officials sound like a broken record these days, talking yet again about the need for washing hands, social distancing and mask-wearing. Yet these elements, along with widespread, speedy testing and tracing of contacts, remain the essential ingredients of an effective anti-Covid strategy.

It is not in the least surprising that cases here and elsewhere are on the rise, given the economically necessitated loosening of restrictions of recent months. Such flare-ups are inevitable, as the World Health Organisation’s Mike Ryan pointed out on Tuesday, but they do not mean the new, post-Covid norm allowing society to re-open cannot be sustained.

The only relevant question is whether these surges can be adequately controlled and the virus effectively put “back in the box” in a targeted manner.

The State has more control over some of the knobs that need twiddling in order to achieve this than it has over others. It can delay the planned easing of restrictions, such as the opening of pubs – a decision taken on Tuesday. It can – and has – severely restricted international travel. It can fund and build a rapid testing and contact-tracing service using the latest available technology; there is still some way to go on this.

But it has less power to influence compliance with social distancing and other measures, which is waning, particularly among young people, as the crisis drags on. And it cannot properly impose meaningful travel restrictions without impinging on the Common Travel Area with the UK, which it is clearly unwilling to do.

For some weeks after restriction were loosened, Ireland’s case numbers continued to fall, leaving us with a relatively low incidence in international terms. And even though now the trend is upward, it isn’t all bad news.

Encouragingly, most of the new cases are linked, and therefore explainable, and only a small proportion is due to community transmission. As in other countries, the biggest outbreaks have occurred in specific environments, such as meat-processing plants.

And while concern has been expressed over the high proportion of cases occurring among young to middle-aged adults, the flip side of this coin is that only a small fraction of those affected are likely to suffer serious illness.

There is also evidence from Australia showing that social distancing introduced to prevent the spread of Covid-19 has effected a massive reduction in flu cases. It is reasonable to hope the same trend will occur here from the autumn on, thereby easing pressure on the health service.

Current Government policy has one principal objective, the full re-opening of schools and colleges from the end of this month. The outcome of this experiment is uncertain, given the mixed experiences of other countries that have re-opened their schools and the seemingly contradictory findings of research studies into the role played by children in transmitting the virus.

That is not a reason for not going ahead with the resumption of classes. Just as in other sectors, that means risks have to be managed. Along with the Perspex and pods, this may mean compulsory mask-wearing in the classroom.

But to make this political promise a reality, there has to be a dialling down on the planned easing of restrictions in other areas, such as pubs and public gatherings. It’s not a terribly refined approach – for example, the decision against increasing the size of outdoor gatherings was based not on what might happen at the gathering but how people would travel to them – but it belongs to the category of erring on the side of caution.

To date, our public health officials, drawing on a broad range of specialist advice, have done well to get the disease under control and then to allow a limited easing of restrictions. Though mistakes have been made along the way, they have shown they have the nous to put forward recommendations based on the best scientific advice, while listening to the public mood. In these difficult times, their proposals remain the best option we have.