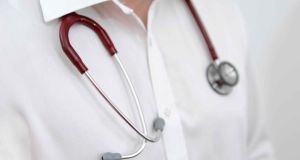 The baby was diagnosed with anencephaly at a maternity hospital in Dublin last week, a condition in which a large part of the brain is missing.


A couple who are travelling to Manchester this weekend for an abortion after their baby was diagnosed with a fatal foetal abnormality have said they feel abandoned by the Government and will campaign for a change in legislation.

Niamh and Ricki, who do not wish their surnames identified, intend to fly to Manchester early on Saturday and have the procedure in a clinic in the city.

Their baby was diagnosed with anencephaly at a maternity hospital in Dublin last week, a condition in which a large part of the brain is missing. The couple were told their baby’s condition was not compatible with life.

Niamh (22) told The Irish Times she felt she was being forced out of her own country to have the termination when it should be available here.

“It should be a basic right because it is not fair on either the parents or the child when the child is actually incompatible with life,” she said. “We have been told that in no circumstances would it survive.”

She said they are still trying to get their heads around the situation in which they find themselves, but they are comfortable with their decision to go ahead with the termination.


Suffering
“We think that it is the best thing for us and for the baby,” she said. “Why prolong the suffering when at this stage the baby is only alive because I’m keeping it alive?”

Niamh said she believes one of the hardest things will be not being able to bring her baby home. “That’s the main thing that makes you angry. You don’t have the right to bring your child home to grieve properly,” she said.

“We’ve tried, but it is just so much red tape and the way they even spoke about it in the clinic – it was just not something that is easily done.”

Under Irish law it is illegal for a woman to have a termination unless there is a threat to her life, including the threat of suicide. Though the Government legislated recently for abortion under those circumstances, it did not include fatal foetal abnormalities as a legitimate reason for termination.

Legal opinion has been divided on whether this could be legislated for or whether a change in the Constitution would be required in order to allow it.


First scan
Ricki explained last night that he and Niamh got the news about the baby’s condition last week at their first scan, when Niamh was just over 11 weeks pregnant. The sonographer was concerned about fluid on the brain; other doctors were called and the diagnosis was made.

They were told the baby would not survive and could die during pregnancy. They borrowed €480 to pay for the abortion and Ricki’s grandmother paid for the flights. The couple intend to fly to England and return home on the same day.

“I do not believe in abortion, but under these circumstances when the baby is deteriorating day in day out, we feel a termination is the right thing,” Ricki said. There was no offer of care or counselling from the Dublin hospital, although staff were kind and they got great help from support group Termination For Medical Reasons.

The couple had been offered free legal support to take an action against the State but they did not feel it was the right thing for them. “We feel we have been abandoned by the Government,” Ricki said.

“We hold the Government entirely responsible for the distress caused by travelling to another country. And we will not let this go until the law changes.”

Post mortem results on mother and two children found dead in Dublin due on Friday 21:28
Gardaí called in six times over money laundering involving solicitors 21:25
Care home residents asked to pay up to €400 for beds and headboards 20:58
Restrictions on religious services to stay after archbishops meet Taoiseach 20:45
First full moon on Halloween night since 1955 will be rare ‘blue moon’ 20:34

1 Majority of Irish Covid-19 cases come from variant that originated in Spain – study
2 Post mortem results on mother and two children found dead in Dublin due on Friday
3 Cork shootings: Father and sons to be buried in two separate funerals
4 Arrest in Spain halts John Gilligan’s efforts to get back into Irish drugs trade
5 Court ruling has major implications for reporting on killings of children
Real news has value SUBSCRIBE