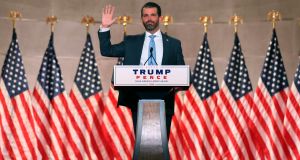 Donald Trump jnr adds to the dozens of people associated with the US president who have been infected by the virus, including Mr Trump himself. Photograph: Chip Somodevilla/Getty Images

US president Donald Trump’s oldest son, Donald Trump jnr, tested positive for coronavirus infection earlier this week and is isolating, according to three people familiar with the matter.

A spokesman for Mr Trump jnr said in a statement he is asymptomatic for Covid-19, the disease caused by the virus.

Mr Trump jnr tested has been “quarantining at his cabin since the result”, the spokesman said.

Mr Trump jnr's announcement comes hours after Rudy Giuliani's son, Andrew Giuliani, a special assistant to the president, announced on Twitter that he had tested positive. This week, two Republican senators, Rick Scott of Florida and Chuck Grassley of Iowa, also said they had the virus.

In addition, an aide to vice president Mike Pence, Hannah McInnis, tested positive earlier this month, according to two people familiar with the matter.

Several of Mr Pence’s aides have been infected, including his press secretary and chief of staff. Mr Pence himself has not.

Mr Giuliani attended a news conference his father hosted on Thursday where he and other Mr Trump-allied lawyers repeated unsubstantiated claims that voter fraud had led to the president’s defeat for re-election.

One of the lawyers, Jenna Ellis, said on Friday on Twitter that she and Rudy Giuliani had tested negative for infection.

The coronavirus pandemic is surging around the country, with new cases regularly topping 150,000 per day since last week. More than 254,000 Americans have died from the virus since February. – Bloomberg/Reuters