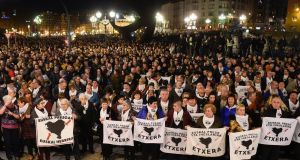 On January 11th, relatives of Basque prisoners demand the transfer of Eta prisoners to jails near their homes. Photograph: Ander Gillenea/AFP via Getty

Spain’s government faces accusations of pandering to separatists and conniving with the political heirs of terrorist group Eta as it attempts to maintain a fragile parliamentary majority.

The Socialist Party of Pedro Sánchez formed the country’s first national coalition of modern times in January, with the Podemos party to its left. But, with their partnership falling short of a majority in congress, they have required the support of an array of smaller regional parties.

Now, with some major legislation facing crunch parliamentary votes, these alliances are being tested and scrutinised.

The leader of the right-wing opposition Popular Party (PP), Pablo Casado, said that in accepting the backing of certain parties, Sánchez had “crossed a black line in exchange for unspeakable support”. Casado and others on the right have cast these alliances as part of a drift by the government towards undemocratic radicalism.

The government’s parliamentary allies have included the pro-independence Catalan Republican Left (ERC). In exchange for its 13 votes in forming his new administration, Sánchez agreed to embark on a series of negotiations aimed at resolving the long-standing dispute over the Catalan region’s relationship with Spain.

Coronavirus has meant that those talks have barely got off the ground. However, many see the government’s education reform Bill, which was approved by Congress on Thursday, as a new concession to Catalan nationalists. The law removes reference to Spanish as the main language to be used in schools, in theory ensuring prominence for regional tongues in nationalist-governed areas such as Catalonia.

But a more controversial development has been the Sánchez administration’s relationship with the Basque pro-independence party, EH Bildu, which has five seats. It is positioned on the far left and seen as the successor to Herri Batasuna, the political arm of terrorist group Eta, which was outlawed in 2003.

EH Bildu’s leader, Arnaldo Otegi, has declared his party’s “proactive and favourable position” with respect to the government’s 2021 budget Bill, whose successful passage through parliament is key if the legislature is to continue.

The government has denied reaching any agreement with EH Bildu. However, transport minister José Luis Ábalos has welcomed its support, saying the Basque party “has more sense of responsibility regarding the budget than the Popular Party”.

Eta killed more than 850 people during a four-decade terrorist campaign for Basque independence. But, although it last killed in 2010 and disbanded in 2018, it remains a live issue for the political right, which frequently accuses opponents of taking a soft approach to Eta prisoners and Basque separatism. Otegi is a particularly provocative figure, having spent several spells in prison, including one for taking part in an Eta kidnap in the 1980s. Although EH Bildu has rejected the use of violence, critics say it has been equivocal in condemning Eta’s killings.

“What if [US president-elect Joe] Biden were to make a deal with a party that did not condemn the September 11th attacks, in which thousands of Americans died?” asked Teresa Jiménez-Becerril, a PP congresswoman whose brother was murdered by Eta.

“This is a very sensitive issue for those who have been victims of terrorism,” says Josep Lobera, a sociologist at Madrid’s Autonomous University. “But within many right-wing political and media circles, a culture has been created in which anything with a separatist association is labelled an enemy of Spain and is linked to Eta.”

The PP and other parties on the right have pointed to the interior ministry’s transferral of several dozen Eta prisoners in recent months to jails closer to their homes in northern Spain as proof of a secret transaction between the government and EH Bildu.

However, the PP itself has in the past engaged in talks with EH Bildu. When in government, the conservatives also moved large numbers of Eta prisoners to Basque jails and negotiated with the terrorist organisation.

More worrying for Sánchez is dissent within his own party’s ranks. Emiliano García-Page, the president of the Castilla La Mancha region, is one of several high-profile Socialists who have voiced concern. He suggested that Sánchez’s coalition partner might be leading him astray.

“I am worried that Podemos might be setting the agenda and dragging us to a corner of the political stage that is a long way from the usual space for the Socialist Party’s broad majorities,” García-Page said.

The centre-right Ciudadanos party, another potential ally of Sánchez, has warned that it will not vote in favour of a budget that has been negotiated with ERC or EH Bildu. However, the Bill is now looking likely to be approved by late December, and other Socialists have pointed out that the Basque party is a legitimate player on Spain’s political landscape.

“We will never forget the victims of terrorism,” said the Socialist president of Valencia, Ximo Puig. “But now we need to see the bigger picture, look towards the future and also understand that in democracy, as long as you obey the rules, everyone can have their space.”