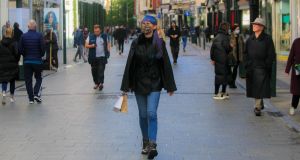 Shoppers amid the pandemic on Monday on Grafton Street, Dublin. “We can’t conclude we have turned the corner in Dublin even if we can see the growth rate is different to what it was,” chief medical officer Dr Tony Holohan said. Photograph: Gareth Chaney/Collins

Dublin could be facing additional Covid-19 restrictions following a rise in cases over recent days.

With Government sources indicating that tighter restrictions are expected in Border counties within days, the capital is also coming under scrutiny following a resurgence of infections over the past three days.

The incidence of the virus in Dublin appeared to stabilise last week but since Saturday more than 200 cases a day have been recorded, according to chief medical officer Dr Tony Holohan.

The National Public Health Emergency Team (NPHET), which meets on Thursday, would be watching the situation in all parts of the country and “would have to be careful how we evaluate Dublin”, he said.

“We can’t conclude we have turned the corner in Dublin even if we can see the growth rate is different to what it was,” he told NPHET’s briefing on Monday. “We don’t have anything like the evidence I would like to be able to conclude the situation in Dublin is sufficiently stable.”

The Government is not going to wash your hands for you, or put on your face mask

Earlier, when briefing opposition parties along with Taoiseach Micheál Martin, Dr Holohan cautioned TDs that the figures in relation to Dublin are “not yet conclusive” and that this could cast doubt on the effectiveness of the current Level 3 measures which are in place.

With widespread and accelerating community transmission occurring, it was not possible to document all patterns of infection, and measures directed at the entire population were needed, according to Dr Holohan. Further deaths in nursing homes were also likely if this pattern continued, he warned.

Dr Holohan said he would like to see “encouraging signs” in the trends by Thursday’s meeting.

He stressed the first line of defence against the virus was individual behaviour, he said, adding that “the Government is not going to wash your hands for you, or put on your face mask”.

Sources say an announcement on increasing border counties to Level 4 is expected by Thursday. Under Level 4 restrictions, people will not be allowed to visit each other’s homes, gyms and leisure centres will be closed and numbers at weddings will be reduced to six. The oversight committee will meet again on Wednesday, before NPHET’s meeting the following day.

Mr Martin and Dr Holohan were questioned by TDs on delays in approving rapid testing kits. Dr Holohan is understood to have told opposition parties that he has received a paper on antigen testing but wanted to go through it and test its validity.

In Northern Ireland, three more deaths and 877 new cases were recorded as Stormont Executive Ministers considered whether a six-week lockdown should be introduced to curb the dramatic rise of the virus there.

The Executive is expected to meet on Tuesday, with evidence of renewed tensions between Ministers on how to tackle the spiralling rise in Covid-19.

Separately, the Taoiseach has undertaken to consider a proposal from Social Democrats co-leader Róisín Shortall to keep “summer time” and not change the clocks at the end of this month. Ms Shortall told the meeting this would give more daylight in the evenings and make it easier for people to get out for exercise and sunlight.