Positivity rate rises from 1.7% to 2.5% in schools where mass testing took place 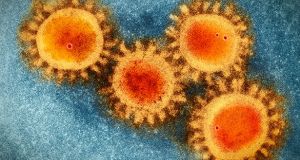 A total of 60 cases were detected in schools last week following mass testing of 2,368 students and staff in primary, post primary and special education schools

The deaths of a further 15 patients with Covid-19 have been reported by the National Public Health Emergency Team (Nphet).

This brings to 2,117 the total number of deaths in the pandemic.

Nphet also reported 310 confirmed cases of the disease on Thursday evening, bringing the total number of cases to 75,203.

As of 2pm today, 202 Covid-19 patients are hospitalised, of which 36 are in ICU. Some 15 additional hospitalisations have taken place in the past 24 hours.

“Risk assess the environments you plan to be in over the next two weeks; are they compliant with public health measures? Can you keep a two metre distance? Are people wearing face coverings?

“Now is the time to make decisions about what interactions are necessary and pose the lowest risk to you, your family and friends over Christmas.”

“Please be mindful that this remains a very dangerous virus, especially for vulnerable and older persons,” he said.

The R rate measures the average number of people infected from one other person.

Separate figures on Thursday show an increase in the number of Covid-19 cases detected in schools.

A total of 60 cases were detected in schools last week following mass testing of 2,368 students and staff in primary, post primary and special education schools.

The previous week 38 cases were detected following mass testing of 2,178 pupils and staff.

The latest figures indicate a 63 per cent increase in the number of positive cases in tested schools over the past week, with the positivity rate rising from 1.7 per cent to 2.5 per cent.

Despite this increase, the transmission of the virus remains low across schools. Health experts previously described the positivity rate of 2.3 per cent in mid-October as “reassuring” and said numbers indicated efforts to prevent the spread of the virus had been “very successful”.

The vast majority of cases detected over the last week were in primary schools (55 cases) while just five cases were found in secondary schools. There were no cases found in special education schools.

The latest HSE data also shows 463 Covid-19 cases were recorded among children of school-going age in the wider community between November 29th and December 5th.

An additional 17 cases were detected in childcare facilities last week out of the total 505 children and staff who were tested, according to the HSE’s weekly Covid-19 mass testing report.

This is more than double the number (8) that tested positive during the previous week’s mass testing.

The HSE numbers only reflect cases identified through mass testing and do no include the “index case” which is the previously identified case in the school community which leads to mass testing in the first place.

As a result, the total number of people with Covid-19 in schools or childcare facilities is likely to be significantly higher.

Earlier, Minister for Health Stephen Donnelly said the Oireachtas Transport Committee was wrong to call for a relaxation of advice on non-essential aviation travel around Christmas.

Mr Donnelly said the Government and public health experts remained concerned about the need to “keep our shape and keep our discipline” and limit social interaction over the holiday period.

The transport committee had called on Wednesday for testing at airports to allow for a greater resumption of air travel.

However, Mr Donnelly explained his concerns were based on the daily reports of the 14-day incidence rate of Covid-19 infection which had begun to increase five days ago.

The minister said Nphet had advised him that there would be “serious exponential growth” in infection rates if the R number (reproductive rate) for Covid-19 increased above 1.2.

“It is something that nobody wants because it puts the hospitals at risk. It puts lives at risk, It puts the nursing homes at risk” he observed.

Speaking on Newstalk FM’s Breakfast, Mr Donnelly said one of the big potential vectors for the disease was people returning to Ireland for Christmas.

He pointed out that most countries in Europe were now branded red for travel purposes which meant anyone coming back for the holidays would have to quarantine for two weeks unless they got a negative PCR test after being back five days.

“What I’m saying, what the Government is saying and I think much more importantly what the public health experts are saying is if you need to come home for Christmas, of course come home,” the minister said.

Mr Donnelly said it was important that people also understood that the antigen tests proposed for use in airports were not as accurate as PCR tests.

The minister said public health experts had very serious concerns about such tests and pointed out that no country was using antigen tests for mass testing at airports.

Mr Donnelly said Nphet had advised him that Covid-19 tests at airports could give people “a false sense of security”.

The Ministers concerns about numbers travelling home to Ireland for the Christmas holidays were also supported by public health expert, Dr Gabriel Scally.

Speaking on RTÉ’s Radio 1’s Today with Claire Byrne show, Dr Scally said calls for an easing on travel restrictions over the holiday period were not helpful in the fight to combat the spread of Covid-19.

“I see it as a real recipe for a disastrous January and February,” he observed.

Dr Scally, professor of public health at the University of Bristol, said a lot of events and situations around Christmas posed additional risks such as increased social interaction, colder weather and lots of movement of people.

Dr Scally said there was every likelihood of a further lockdown in early 2021 because of activities around the Christmas holidays.

Mr Donnelly also defended the Government’s priority list for the rollout of the Covid-19 vaccine which he said was based on the advice of the National Immunisation Advisory Committee.

He said the objective of the list was to save as many lives as possible and prevent as many serious illnesses as possible.

On the issue of allergic reactions to the Covid-19 vaccine, Mr Donnelly said he did not believe there was any reason for the public to be concerned as it was not unusual for people to have a reaction.

Separately, a leading medical expert has claimed the advice by the UK health authorities that people with a history of significant allergic reactions should not avail of Pfizer’s Covid-19 vaccine is “relatively normal”.

The Medicine and Healthcare products Regulatory Authority in the UK issued the warning on Wednesday after two NHS workers experienced anaphylactoid reactions after receiving a dose of the new vaccine.

Professor Ultan Power, professor of molecular virology at Queen’s University Belfast, said the fact that the two healthcare staff had been carrying epi-pens showed they were aware they had significant allergic reactions in the past.

Prof Power noted that trials on the Pfizer vaccine had also excluded anybody with a severe allergic reaction to any component of the vaccine.

“It’s relatively normal to have reactions to all vaccines,” said Prof Power.

Speaking on RTÉ Radio 1’s Morning Ireland, he said doctors administering the vaccine should also be aware of their patient’s medical history in relation to any allergic reactions.

Prof Power said there was no evidence to date that there would be any problem with the vaccine for people with mild reactions such as hay fever.

Prof Power said the two NHS staff who suffered the reaction should be studied to see if the vaccine could be reformulated to remove the part that caused the reaction.