Competing ‘world class’ architects to be announced next week 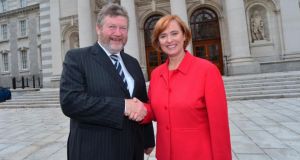 Six “world class” architectural firms competing to design the new national children’s hospital in Dublin will be named next week.

The winning design pitch will then be selected and a planning application submitted to An Bord Pleanala this autumn.

At a briefing on the project today, the development team behind the 469 bed facility said it was confident the project would get the go-ahead on the St James’s Hospital site and open as planned in 2018.

While the design will be new, it is understood that much of the specification arrived at for the unsuccessful Mater Hospital scheme will remain in place.

“The reason why it didn’t get through the last time was over-densification of the site. This is a very different site; actually it’s twice the size of what it is at the Mater,” said Eilish Hardiman, chief executive of the Children’s Hospital Group Board.

“The development board is different this time because it is made up of expertise around planning and construction and engineering who have assured us, the client, that the hospital will actually meet the planning criteria and will be de-risked and will meet according to the local area plan.”

Ms Hardiman said services would be transferred from the existing hospitals at Crumlin, Tallaght and Temple Street, by the end of 2018 and she did not envisage delay.

Focus will now shift to the design, build and budget of the hospital, details of which will begin to emerge in the coming months.

A design team should be in place by spring with an overall concept for the facility finalised toward the end of 2014, moving to construction early next year. Costing should be announced by the summer.

“So now the real responsibility and the spotlight is on the Development Board. We have the responsibility to design and build and equip,” explained Tom Costello, chairman of the second of the two boards behind the project.

“At the end of the day we want to create a facility that we will be proud of and that will serve the community and the country for generations to come.”

However, he stressed he did not want the project “to get carried away with any grandiose plans” and that a “robust cost control” approach should help usher the project in on budget.

John Pollock, project director, said the “vision is to be one of the best hospitals in the world.”

A charter will oblige the eventual contractor to engage with the local community to benefit from some of the roughly 1,000 jobs during construction.

On the patient services side, Dr Emma Curtis, medical director of the Development Board, said that once complete, all rooms will be single for infection control, en suite and with “quality accommodation” for parents.

There will be advanced theatres, a hospital school, as well as play areas and gardens, recognised as being an important aspect of child recovery.