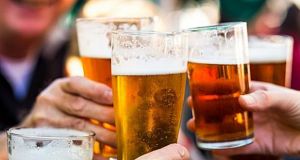 Gardaí may now consider appealing any application by these premises to renew their licence in September. File photograph: Getty

Gardaí have warned Ministers that a number of pubs are “blatantly breaching” Covid-19 public health guidance but carrying out thousands of checks will become a significant drain on the resources of the force.

The Cabinet considered a report on compliance from gardaí and health officials on Monday which warned that officers experienced a “challenging” weekend particularly in relation to pubs in Dublin city centre where there was no physical distancing.

A senior source said gardaí had advised that while there was generally good compliance, some pubs were “blatantly breaching guidelines and did not rectify the issue when they were given a chance to do so”.

Gardaí may now consider appealing any application by these premises to renew their licence in September.

Taoiseach Micheál Martin warned that plans to reopen the remaining pubs on July 20th may not go ahead.

“Nothing can be guaranteed. If this behaviour is to continue, we will have to seriously review it. We want pubs to open safely but we can’t be blind to what is going on right now. We are not happy with what transpired in certain locations over the weekend,” he said after the Cabinet meeting.

Mr Martin said the Government was worried about the contents of the briefing from senior officers.

The Cabinet also agreed to extend the current advice to the public to avoid all non-essential travel until July 20th. A “green list” will be published at the time but travellers have been warned they may still have to quarantine upon their return if there is a spike of cases in the country visited. Some 17 per cent of new cases of Covid-19 are now linked to foreign travel while there has been a sharp increase in footfall in Dublin Airport.

The Department of Health will examine proposals for testing at entry points to the State and the Government will seek to outsource a call centre to check on passengers returning to the State who are advised to self-quarantine.

A Covid-19 tracking app will be launched on Tuesday morning after the Cabinet approved its use. In drawing up the “green list”, the Government will analyse the number of new Covid cases per 100,000 inhabitants in the preceding 14 days in a given country.

The 14-day incidence of the disease in Ireland currently stands at 2.96 cases per 100,000 of population, according to acting chief medical officer Dr Ronan Glynn.

This compares to an average incidence of 13.1 across Europe, where rates vary between zero and 143, according to the European Centre of Disease Control. Just a handful of European countries would make it on to a green list if the strict criterion limited it to countries with a lower incidence than Ireland.

Ireland was in an “almost uniquely good” position in relation to Covid-19 but could end up “back where we were months ago” if we made the wrong choices, Dr Glynn warned last night. In contrast, if we make the right choices, we can hope to keep the disease under control.

The decision to defer the publication of a green list to July 20th left Ireland with a few weeks to see what happened in other countries, he said.

While it was “not unexpected” that large clusters would occur, the test was whether countries managed to control these outbreaks quickly.

“A number of countries recently had problems and this gives us a little more time to see if they can get on top of those problems and close them down.”

With global trends changing rapidly – and 200,000 new cases a day reported over the weekend – Ireland “needs to see where this goes”.

“The global situation could get worse over the week or two, in which case we’ll have to think over who is or not on the green list.”

No new deaths of people diagnosed with Covid-19 were reported by the National Public Health Emergency Team for the second day in a row, the first time this has happened since March 21st. The team reported another four new confirmed cases.