Anxious? Gut bacteria may be to blame, say scientists 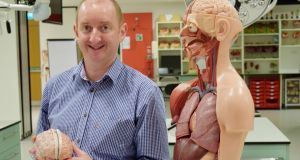 Scientists in Cork have shed new light on how gut bacteria may influence behaviour associated with anxiety and fear.

The discovery relates to gene regulators called microRNAs – their dysfunction in the brain is believed to be a key factor in anxiety-type illnesses and depression.

The biochemical links between the brain and the microorganisms in the human gut - known as the microbiome - has been a new frontier of research in recent years.

“The extent, and the manner, of this dialogue is made clear in [THE]research, revealing a new level of communication between the gut microbiome and the brain,” according to the scientists based at the APC Microbiome Institute at University College Cork.

They have demonstrated in animal models that trillions of bacteria within the gastrointestinal tract can influence microRNAs (miRNAs) in areas of the brain that are involved in processing anxiety and fear-related behaviours.

They found that miRNAs were changed in the brains of microbe-free mice. These mice were reared in a germ-free bubble and displayed abnormal anxiety, deficits in sociability and cognition, and increased depressive-like behaviours.

Gut microbes seem to influence miRNAs in two specific parts of the brain, explained Dr Clarke. “This is important because these miRNAs may affect physiological processes that are fundamental to the functioning of the central nervous system and in brain regions which are heavily implicated in anxiety and depression.”

Dysfunction in miRNAs is believed to be an underlying factor contributing to stress-related psychiatric disorders, neuro-degenerative diseases and neuro-developmental abnormalities.

Dr Clarke said it may be possible to modulate miRNAs in the brain for the treatment of psychiatric disorders but research in this area has faced several challenges, for example, finding safe and biologically stable compounds that are able to cross the blood-brain barrier and then act at the desired location in the brain.

Their study suggests some of the hurdles that stand in the way of exploiting the therapeutic potential of miRNAs could be cleared by instead targeting the microbiome and possibly by consuming “psychobiotics”. These are probiotics containing live bacteria, or prebiotics (foods which support probiotics), with mental health benefits.

The findings suggest a healthy microbiome is necessary for appropriate regulation of miRNAs in the brain.

Previous research demonstrated that manipulation of the gut microbes affects anxiety-like behaviours but this is the first time that the microbiome has been linked to miRNAs in two specific brain locations, according to the authors.

“The psychobiotic revolution is coming,” Prof Cryan declared, “and we can now add miRNAs to an expanding range of therapeutic targets in the brain that can potentially be controlled by manipulating the bacteria in our gastrointestinal tract.”

Targeting gut microbes by using psychobiotics “is an appealing prospect”, Dr Clarke added, but more work is needed “before the full benefits of this exciting work can be moved into a clinical setting”. The exact mechanism by which the microbes are able to influence the miRNAs in the brain remains unclear.

The research was funded by Science Foundation Ireland and the Brain and Behaviour Research Foundation. The institute is this week hosting NeuroGASTRO 2017, a conference attended by 460 experts in this area of research.