WHO calls for stiff regulation of e-cigarettes, including bans on indoor use and sales to minors 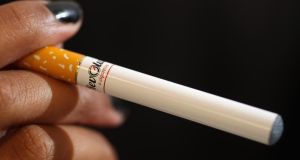 The WHO has recommended a ban on indoor smoking of e-cigarettes as part of tougher regulation of products dangerous to children. Photograph: Dan Kitwood/Getty Images

A group of tobacco experts has criticised a World Health Organisation (WHO) report calling for more regulation on e-cigarettes, saying the evaluation used “alarmist language” to describe its findings.

Ann McNeill, a researcher at the national addiction centre at King’s College London, said she was “ shocked and surprised” at the report. “I felt it was an inaccurate portrayal of the evidence on e-cigarettes,” she said.

The WHO’s report last month called for stiff regulation of e-cigarettes as well as bans on indoor use, advertising and sales to minors. Ms McNeill said that while e-cigarettes are relatively new and “we certainly don’t yet have all the answers as to their long-term health impact”, it is clear they are far safer than cigarettes, which kill more than six million people a year.

The uptake of e-cigarettes, which use battery-powered cartridges to produce a nicotine-laced vapour, has rocketed in the past two years, but there is fierce debate about their potential risks and benefits. Because they are new, there is a lack of long-term scientific evidence on their safety. Some experts fear they could lead to nicotine addiction and be a gateway to tobacco smoking, while others say they have enormous potential to help millions of smokers around the world kick their deadly habit.

Peter Hajek of the tobacco dependence research unit at Queen Mary University of London, who co-authored the critique of the WHO review, said it was vital that e-cigarettes should be assessed in relation to the known harms of tobacco cigarettes.

“There are currently two products competing for smokers’ custom,” he said. “One - the conventional cigarette - endangers users and bystanders and recruits new customers from among non-smoking children who try it. “The other - the

e-cigarette - is orders of magnitude safer, poses no risk to bystanders, and generates negligible rates of regular use among non-smoking children who try it.”

According to the authors of the critique, the WHO review implied e-cigarette use in youth had become a major problem and could be acting as a gateway to smoking. They said the review failed to acknowledge that the concentrations of toxins found in e-cigarettes were mostly a tiny fraction of what is found in cigarette smoke.

The review gives the impression that e-cigarettes make it more difficult for people to stop smoking, when the opposite is true, the experts added.

Vaccines regulator would take AstraZeneca Covid-19 jab if offered it