Event organised by pro-choice activists to highlight laws around terminations

Police kept a close eye as pro-choice activists delivered abortion pills to women in Northern Ireland using a drone. The stunt, described as an act of solidarity, aimed to highlight the strict laws around terminations on both sides of the border. 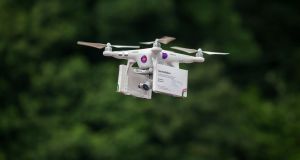 Pro-choice activists deliver abortion pills to women in Northern Ireland from the Irish Republic using a drone, at Narrow Water Castle near Warrenpoint in County Down. Photograph: PA 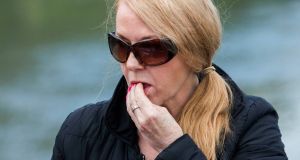 Lucy Simpson of Labour Alternative with an abortion pill which was delivered by a drone: “The law is archaic. We are governed in Northern Ireland by an Act which is dated 1861, which is in the dark ages.” Photograph: PA 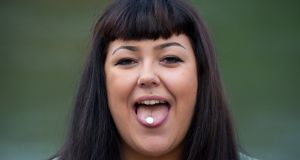 Courtney Robinson of Labour Alternative with an abortion pill which was delivered by a drone: “We are here to say we are going to defy the law in helping women obtain these pills.” Photograph: PA

The stunt, described as an act of solidarity, aimed to highlight the strict laws around terminations that exist on both sides of the Irish border.

Courtney Robinson (18), from Belfast, who took the tablets, said: “We are here to say we are going to defy the law in helping women obtain these pills and we are going to work to make the law unworkable and stand in solidarity with all women who want to have an abortion and have the right to do so in Northern Ireland.”

The drone flight started at Omeath in Co Louth and landed a short distance away, near Narrow Water Castle in Co Down, shortly after 10am.

Ms Robinson, a member of Labour Alternative, added: “The reason we are doing this is to highlight that these pills are available to women who are not able to travel outside of Northern Ireland for an abortion.

“I have no concerns. I know the pills are safe.

“As long as politicians in Stormont and the Dáil continue to ignore human rights we will continue our campaign.”

A number of uniformed and plain clothes police officers who were at the landing site spoke to organisers and recorded events on video, however no action was taken to confiscate the medication, which had been prescribed by a doctor.

Traffic was also stopped on the main road while the drone was in the air.

The drugs, Mifepristone and Misoprostol, can be taken up to nine weeks into a pregnancy and have been approved for use by the World Health Organisation since 2005.

She said: “The law is archaic. We are governed in Northern Ireland by an Act which is dated 1861, which is in the dark ages, it’s like when dinosaurs were on earth. We think it should be changed radically and we can’t really wait any longer.

“Thousands of women suffer every year in Northern Ireland and the Republic having to travel abroad for abortions and go through very traumatic times.

“We feel now is the time to change legislation.”

The event was organised by a collaboration of pro-choice groups, Alliance For Choice; Rosa; Labour Alternative and Women On Waves, which staged a similar flight from Germany into Poland.

The groups said no laws had been broken, adding in a statement: “The ‘abortion drone’ will mark the different reality for Irish women to access safe abortion services compared to women in other European countries where abortion is legal.”

In Northern Ireland, the maximum penalty for the crime of administering a drug to induce miscarriage under the relevant law, namely the Offences Against The Person Act 1861, is life imprisonment.

In April a 21-year-old woman was handed a suspended sentence by a judge in Belfast after she bought drugs on the internet to induce a miscarriage because she could not afford to fly to England.

In the Irish Republic, the offence of procuring an abortion carries a potential 14-year jail term.

Later, campaigners are planning to stage a picket outside Belfast High Court where a ruling which found the law in Northern Ireland was incompatible with human rights legislation is being appealed against.

Pro-life organisations had vowed to do all in their power to stop the drone, however there was no protest at Narrow Water.