Male contraception proving to be a cut above the rest 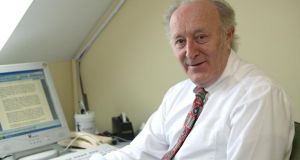 Dr Andrew Rynne: recalls that his “local parish priest called to my house. He seemed anxious to set me straight on the immorality of my behaviour. ‘Mutilation’, he muttered. I politely showed him the door.”

It may have been a long time coming, but World Vasectomy Day celebrates its first birthday today. In 2013, co-founders Jonathan Stack and Dr Doug Stein said they hoped to bring vasectomy services to as many men as they could. Some 100 doctors in 25 countries did 1,000 vasectomies in a 24-hour period.

World Vasectomy Day is not just about the numbers of vasectomies done, however, but about the quality of the conversations it ignites, say its founders. Men, it is hoped, are inspired to engage in the conversation about family planning.

Filmmaker Stack produced the documentary The Vasectomist, which follows urologist Stein, who has done more than 30,000 procedures, as he strives to save the planet by “spreading the gospel of vasectomy”. An evangelist vasectomist, so to speak.

Stack is a big fan of ethical arguments for vasectomy. “You accomplish more carbon footprint reduction with one vasectomy than 20 lifetimes of reusing, reducing and recycling,” he says. “There’s no greater gift you can give yourself, the country and our future.”

The Irish Family Planning Association has been in the vanguard of vasectomy here for decades. In the spring of 1974 the association announced that it had performed four vasectomies in its Mountjoy Clinic in Dublin.

The doctor who did them was Andrew Rynne. “Obligatory gasps of shock and horror, not to mention the background din of crozier rattling, spread across Ireland,” he recalls. “Was it not bad enough that this association was promoting sex outside of marriage and encouraging adultery? Now it was mutilating men as well.”

The introduction of vasectomy into Ireland was “truly revolutionary stuff”, says Rynne. “For liberals it was quite exquisite. It broke all the rules.” But in Ireland, in the early 1970s, “where nobody could or would perform a vasectomy”, the IFPA had to fly in a female surgeon from Britain to do the job.

In 1978, Rynne says, his “local parish priest called to my house. He seemed anxious to set me straight on the immorality of my behaviour. ‘Mutilation’, he muttered. I politely showed him the door.”

Things have changed. In 2013, the IFPA performed 19 vasectomies, says chief executive Niall Behan. For the sake of clarity, vasectomy is a minor surgical procedure that seals the tubes which carry the sperm from a man’s testicles to his penis. The operation is carried out under local anaesthetic and takes about 10 minutes to complete.

According to the association’s medical director, Dr Caitríona Henchion, vasectomy is still a favoured contraceptive option for some of her clients. “Men in couples, where he decides to have a vasectomy, have decided that it’s his turn to ‘do something’.”

Some men who are in a new relationship but already have children and do not want any more also access vasectomies. She says the cost is about €300-€400.