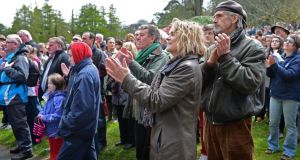 Actors Jeremy Irons and Sinead Cusack at a protest against the sale of State forests in Avondale, Co Wicklow. Photograph: Eric Luke

The return to the State from the sell-off of Coillte’s harvesting rights would have been far too low to justify it going ahead, a source close to the process has said.

A figure of €700 million was advanced as the amount that might be realised in a sell-off but the source said the actual amount was considerably lower than that.

As part of the deal with the troika, half of the proceeds raised from State assets would have been allowed to fund job-stimulus programmes.

“The [earlier] expectation it was going to be €700 million was not going to be borne out. The amount that could be [given] to stimulus did not make it worthwhile,” said the source.

The decision has been widely welcomed by Government TDs, especially from the Labour Party.

People Before Profit TD Richard Boyd Barrett had also been a vocal critic of any such sell-off. Thousands of people attended a protest in Co Wicklow last month.

The Government’s focus in relation to the future of the State forestry company has turned to examine the feasibility of a merger with Bord na Móna.

A small amount of preliminary work has already been done on this matter and the prospect of a merger forms part of the programme for government.

However, both the Department of Agriculture and the Department of Energy said yesterday it was much too early in the process to make any evaluation, or to predict the shape of any such merger, if it was to go ahead.

A spokeswoman for Minister for Agriculture Simon Coveney said the current focus was to be on the restructuring of Coillte.

“It was also decided that a robust analysis be carried out to evaluate how to give effect to a beneficial merger of Coillte with Bord na Móna to create a streamlined and refocused commercial state company operating in the bioenergy and forestry sectors, as committed to in the programme for government,” she said.

“It was further decided that consideration will be given to all the options to maximise value from Coillte when the restructuring is complete in 18 months’ time.”

Minister for Energy Pat Rabbitte said a major policy paper on bioenergy would be published this year. The study will have a bearing on the question as to whether a merger of the two companies makes sense.

Pointing out there was a social as well as a commercial dimension to the Government’s thinking, he said: “There is a significant proportion of the population who value the social amenities that Coillte has put in and feel very strongly that they should be retained.”

Mr Rabbitte said the report on bioenergy would inform policy choices. He pointed to possible synergies between the two companies, which had some coterminous lands. Afforestation of some of the 200,000 acres of cutaway bog in Bord na Móna’s ownership was one possibility that might be explored.