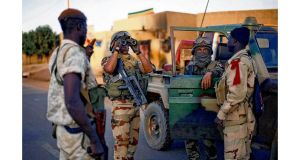 French and Malian forces have regained control of northern Mali’s largest city after two days of instability and heavy fighting with Islamist rebels.

Soldiers cordoned off Gao and were conducting a house-by-house search to find any remaining fighters, sources said, after rebels launched a surprise attack on the city at the weekend.

“Yesterday was like nothing I have ever seen before,” said a person in Gao who did not want to be named. “There was heavy gunfire for over four hours, there were street battles with the Malian and French soldiers fighting against the jihadists. Early this morning we heard a large bomb blast but no one seems to know what it is.”

Many residents in Gao barricaded themselves in their homes during the weekend while fierce clashes took place outside in the streets.

Yesterday morning many emerged around the heavily damaged police headquarters in the centre of Gao, where body parts lay strewn. “Yesterday we heard the gunfire and hid in our homes all evening,” Gao resident Soumayla Maiga told Associated Press. “We were stunned when we came out and saw what happened.”

The French and Malian armies, part of an international military intervention against al-Qaeda-linked groups operating in northern Mali, said Gao was back under their control.

“The situation is being managed by the military, but it is changing rapidly,” said Malian minister of communication Manga Dembélé. “As to whether the efforts are enough to rid the north of Islamists, we can’t say until the conclusion of the military operation.”

Recent events in Gao have heightened fears of a prolonged conflict in the country, where French air strikes have reportedly driven rebels into desert hiding places in the vast northern Sahara. There were suicide bomb attacks in Gao last weekend – the first in Mali. An Islamist group, the Movement for Oneness and Jihad in West Africa, claimed it had carried out the checkpoint blasts.

“What’s happening in Gao is serious, but it’s what most observers expected,” a Bamako-based western diplomat said.

“It’s difficult to say whether this is some sort of final stand of the last few Islamists remaining around Gao, or whether they have the people and resources to stay and fight for years.

“I suspect it’s more towards the former than the latter. Local people are very hostile to the Islamists, which makes this situation very different from Afghanistan, for example.

“This local popular support for the French intervention will make it much more difficult for these terrorist groups to operate.” – (Guardian service)

Man held after gardaí seize cannabis worth €800,000 in Dublin 21:10
Guardiola takes blame for City’s European failings 21:12
Hugo Keenan could start in changed Ireland team against Italy 21:04
People who throw house parties can be fined €1,000 and jailed for up to a month under new proposals 21:04
Ireland ‘needlessly importing timber’ due to Government failures, sawmillers claim 20:56