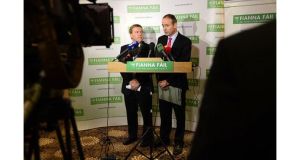 The third opinion poll in a month has shown an increase in support for Fianna Fail.

However Fine Gael remains the largest supported party at 28 per cent (no change), followed closely by Fianna Fail at 26 per cent (up five percent).

Support for Labour has increased by one percentage point to 12 per cent. The support for Fianna Fail seems to have come from Sinn Féin and independent voters.

Some of the 1000 voters polled would have been surveyed after last Tuesday’s apology to the Magdalene survivors by Taoiseach Enda Kenny. The poll was taken last Monday, Tuesday and Wednesday.

Support for Fine Gael remained unchanged despite the apology and the promissory note deal.

Last week a Millward Brown poll for the Sunday Independent showed that Fianna Fáil had become the most popular political party in the State.

The Sunday Independent poll showed – when undecided voters (27 per cent) were excluded – Fianna Fail, 27 per cent; Fine Gael, 25 per cent; Labour 13 per cent; Sinn Féin, 20 per cent; and Independents/Others, 16 per cent.

An Irish Times poll conducted on February 4th and 5th showed Fianna Fáil had recovered ground to become the best supported party in the State for the first time since the economic crisis struck almost five years ago.

It put party support – when undecided voters were excluded – Fianna Fáil, 26 per cent; Fine Gael, 25 per cent; Labour, 10 per cent; Sinn Féin, 18 per cent; Green Party, 1 per cent; and Independents/Others, 20 per cent.

3:45 'I thought I was going to die': Ocasio-Cortez on the storming of US Capitol