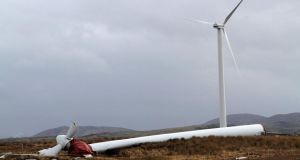 A technical examination is being carried out to try to establish how a large wind turbine near Maas, close to the Ardara area of Co Donegal, came crashing down on Thursday. While winds were heavy at the time it was nonetheless understood that these turbines were engineered to withstand such conditions.

Northern Ireland ’s First Minister Peter Robinson has said the Northern Executive may examine how to compensate farmers as heavy snow and bitter east winds continue to cause problems in the North.

Temperatures will also stay low in the Republic this week but conditions will be dry, Met Éireann has said. Average temperatures will be about 3 degrees, though the wind chill effect will bring it down to below zero, highly abnormal for the time of year.

In the North, the number of households without electricity has been reduced to a few hundred. The main focus yesterday was on trying to ease the plight of farmers, particularly sheep farmers who are now in the lambing season. Farmers, mainly in northeast areas, lost hundreds of sheep and lambs due to the heavy snows. Many farmers were also unable to get fodder to livestock due to impassable roads and snow drifts. Farmers appealed for extra assistance including helicopters to drop food to livestock.

Mr Robinson on a visit to Dromara in Co Down, one of the worst affected areas, said he would consult with Executive colleagues to see what could be done to help farmers. He said the DUP had also asked the British army’s Territorial Army in Northern Ireland to assist in clearing roads.

The Sinn Féin Minister of Agriculture Michelle O'Neill who visited a farm in Glenarm in the Glens of Antrim, which is also badly hit, said conditions were some of the worst experienced in decades. “I have asked that all resources available to the Executive, including those of the emergency services, are made available to help those affected,” she said.

“As this animal welfare situation develops I and my officials are keeping in close contact with farming representative bodies. I would appeal to farmers not to be taking any unnecessary risks whilst tending to their animals,” she added.

Dozens of schools remained closed yesterday because of the bitter weather. The harsh conditions are likely to continue for a number of days.

Meanwhile, a technical examination is being carried out to try to establish how a large wind turbine near Maas, close to the Ardara area of Co Donegal came crashing down on Thursday. While winds were heavy at the time it was nonetheless understood that these turbines were engineered to withstand such conditions.