Australian teenager had over half a million followers, calls on others to quit social media 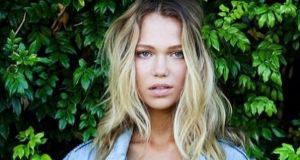 O’Neill recaptioned this photograph to read: “This is the only shoot I’ve ever done that I actually enjoyed.”

An Australian teenager with more than half a million followers on Instagram has quit the platform, describing it as “contrived perfection made to get attention”, and called for others to quit social media – perhaps with help from her new website.

Essena O’Neill (18) said she was able to make an income from marketing products to her 612,000 followers on Instagram – “$2000AUD a post EASY”. But her dramatic rejection of social media celebrity has won her praise.

On October 27th she deleted more than 2,000 pictures “that served no real purpose other than self-promotion”, and dramatically edited the captions to the remaining 96 posts in a bid to to reveal the manipulation, mundanity, and even insecurity behind them.

A photo of her wearing a bikini, once captioned “Things are getting pretty wild at my house. Maths B and English in the sun,” has been edited: “see how relatable my captions were – stomach sucked in, strategic pose, pushed up boobs. I just want younger girls to know this isn’t candid life, or cool or inspirational. It’s contrived perfection made to get attention.”

“Like, it’s not cool. No one thinks that’s radical, or revolutionary.

“Yet I, myself, was consumed by it. This was the reason why I quit social media: for me, personally, it consumed me. I wasn’t living in a 3D world.”

“I remember I obsessively checked the like count for a full week since uploading it,” she wrote of her first-ever post, a selfie that now has close to 2,500 likes. “It got 5 likes. This was when I was so hungry for social media validation ... Now marks the day I quit all social media and focus on real life projects.”

This includes letsbegamechangers.com, O’Neill’s new site “aimed to inspire constant QUESTIONING”, where there’s “no likes or views or followers … just my content as raw as I want”.

In her first post, dated October 31st, she challenged her followers to go a week without social media, and recommended Eckhart Tolle’s book The Power of Now.

The site will cover “veganism, creative imagery with purpose, poems, writing, interviews with people that inspire me”.

She will continue to post videos about vegan eating to YouTube, but Vimeo (“made to help not to get views or $$$”) will “host all the new quality content”.

O’Neill’s “crisis of conscience”, as it was described by US Magazine, seems to be extending to more than just the manipulation of social media.

O’Neill, whose veganism has long been a cornerstone of her online presence, edited the caption of a photograph of scrambled eggs and bacon pre-dating her change in diet to read “Chicken periods scrambled up with pig flesh ??”.

A snapshot of her fishing now refers to “how fun … to put a hook through an innocent beings mouth”; one of a pile of chocolate bars is described as “Poison and Violence”.

“I wish I would have been more conscious to see how white privileged I was,” she writes of her time spent volunteering in Laos.

A fellow vegan, Australian Instagram star Bonny Rebecca – a friend of O’Neill’s – said at first she “may have been confused” by the rebrand, because her own experiences of social media have been “very positive”.

Rebecca commented to a follower on Tumblr: “Obviously it’s been super hard for me because Essena has put out all this information about what SOME instagramers are like, then left social media and of course I have been left with everyone comparing us and thinking that she is implying those concepts are relevant to my account. And man that is not fair, because thats NEVER what I have been about.”

But she was supportive of O’Neill’s decision.

“So many people strive to be ‘popular’ online to validate themselves, manipulating photos and captions to give the idea they are happy just to get ‘followers’ … And be ‘idolised’… When NONE of that truly matters and that’s what can be wrong with social media! Essena is exposing that(!!!) and that is a big game changer ?? ,” she captioned a photo of the two of them together that had attracted 13,800 likes.

O’Neill also uploaded her own vlog about the drama, “where I try to shed some light on the situation and my thoughts”.