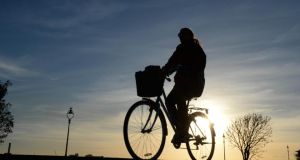 On the cycle path at Clontarf, Dublin: a missing 2km section is about to be built. Photograph; Dara Mac Dónaill / The Irish Times

Construction of the €5 million“missing link” of the Dublin Bay cycle path is starting this week, more than a decade after planning of the route began.

The work to fill in the missing 2km section of the cycle route from the Wooden Bridge to Causeway Road in Clontarf is part of the planned Sutton to Sandycove S2S cycleway.

The full route crosses three local authority boundaries and will take several years to construct. Once complete, it will provide a 22km continuous off-road cycle route around the bay and would be one of the longest coastal promenades in Europe.

The Fairview to Sutton section was put in place by the early 1990s but a space was left between Causeway Road and the Wooden Bridge because no solution could be found to building on the environmentally sensitive lagoon.

As a result, cyclists heading south have to leave the off-road path at the Wooden Bridge traffic lights and use the on-road cycle path on Clontarf Road which is in extremely poor repair and frequently occupied by parked cars.

Cyclists can return to the path 300m short of the causeway, but must cross two lanes of traffic at a point not governed by signals.

After several years in development a plan was finalised in 2008. This involved a pile-supported promenade and cable-stay bridging out over the lagoon. Its cost was up to €14 million, or €7 million per kilometre, and it was never implemented.

The new scheme will cost less than half that and will involve no construction over the lagoon. Instead the road will be reduced to a three-metre width in each direction and a two-way 3.5m cycle path will run along the coast.

Work is starting this week on the west side of the road, not the seaward side, and will continue until the end of July. Work on the coastal side of the road will begin in the autumn. The full scheme is due for completion in July 2016.

Traffic access will be maintained along the road during the works but may be reduced to one lane, with a stop-go system at certain times, the council said.

The work will also involve footpath and road resurfacing, sea-wall repairs, and 2km of trunk water main. The old tram shelter on Clontarf Road will be rebuilt.