Crohy Head in western Donegal is exposed to Storm Barney as high winds sweep in off the Atlantic Ocean. Video: Iain Miller 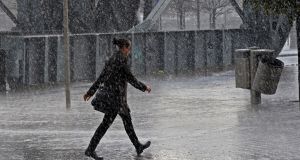 Met Éireann recorded the wettest November in the State since 2009. Photograph: Eric Luke / The Irish Times

November 2015 will be remembered for reaching the fastest wind speeds in 70 years, the highest rainfall in six years and above average warm temperatures.

Met Éireann published its monthly and seasonal reports on Wednesday showing Autumn was milder, drier and windier than normal in many places across Ireland.

Storm Barney and Clodagh were responsible for two thirds of the country’s weather stations reaching their fastest monthly wind speeds for November in the last six to 10 years.

The highest gust and wind speeds were reported during Storm Barney on November 17th, at Shannon Airport at 128km/hr.

It was the weather station’s highest recorded wind speeds since it opened 70 years ago.

Mace Head in Co Galway also recorded its highest 10-minute wind speeds of 98km/hr since it opened in 1996.

Ireland’s rainfall did not disappoint with Met Éireann recording the wettest November since 2009.

Most counties recorded higher than average rainfall with Newport in Co Mayo recording the highest at 321mm.

The west and southwest had up to 26 days of rain during the month while Dublin and Wexford escaped the worst of the rain with the lowest rainfall at 105mm.

Warm weather was recorded across the country with temperatures up one degree on normal November weather.

Fermoy in Co Cork had its warmest November in 36 years with a monthly mean of 9.9 degrees. Also in Cork, Sherkin Island recorded the highest mean monthly temperature of 11.2 degrees.

Knock airport in Co Mayo was the coldest area.

It was the dullest November in eight years for three weather stations, two in Dublin and Knock airport in Co Mayo.

Malin Head in Donegal had the lowest monthly total of sunshine with 1.3 hours a day, while Dublin airport enjoyed the highest level with 8.3 daily hours.

October and November were warmer than normal but September had below average temperatures.

The south of Ireland was the driest area during October while the wettest was in the Midlands over November.

The wettest day of the season was recorded in Newport in Co Mayo on September 11th, its wettest autumn day in 48 years.

Belmullet in Co Mayo boasted the most sunshine for the season with 12.6 hours on September 8th.